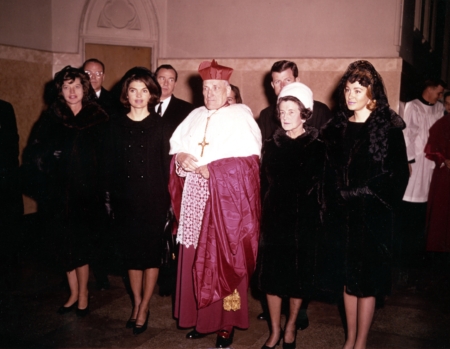 BOSTON -- The Schiller Institute will present Mozart's Requiem in D minor at the Cathedral of the Holy Cross in Boston, as a remembrance of John F. Kennedy on Sunday, Jan. 19.

The event will mark the 50th anniversary of the historic Jan. 19, 1964 performance of Mozart's Requiem and Pontifical Mass, held at the Cathedral and presided over by Cardinal Richard Cushing, at which Boston mourned her fallen son.

The 1964 event, though less known than the state funeral held on Nov. 25, 1963, was attended by the President's widow, members of the Kennedy family, thousands of citizens, and was watched on television across the nation.

Mozart's "Requiem Mass in D Minor" was celebrated, that day, as organized by the conductor Erich Leinsdorf -- known in relation to the Kennedy assassination for announcing the death during a Boston Symphony Orchestra concert at Symphony Hall.

Msgr. Russell H. Davis directed the choir from St. John Seminary, which sang responses and other parts of the liturgy.

"It is fitting, 50 years later, to commemorate the spirit of cultural and economic progress that John F. Kennedy's leadership represented for America and the world. With this spirit, President Kennedy confronted and sought to overcome the terrifying prospects of global war, poverty, and human degradation that faced the nation and the world during his time," the Schiller Institute said in an invitation to the concert on their website.

"In the intervening years, these existential problems have come to threaten mankind in even greater magnitude; but the national mind that had once joyfully embraced the challenge to conquer the Moon, has been supplanted by a spirit that belittles the sacredness of the human individual and the power of human creativity," the invitation said. "Let us honor the memory of John Kennedy by not only reflecting on what was, and what could have been, but on how our culture has changed, and how we must now recommit ourselves to its renewal."

Organizers said Wolfgang Amadeus Mozart's Requiem is a most fitting tribute to John F. Kennedy, as Mozart's work communicates the same optimism and belief in man's infinite progress to which President Kennedy dedicated his life.

The concert will be performed by a 100-person extended Schiller Institute Chorus, along with an orchestra and soloists assembled for the occasion by the Schiller Institute. The performance will be at the natural "Verdi tuning" of A=432 Hz.

The concert is free and open to the public. First come, first seated. For more information, call: 617-340-6544, or email: requiemconcert@schillerinstitute.org.