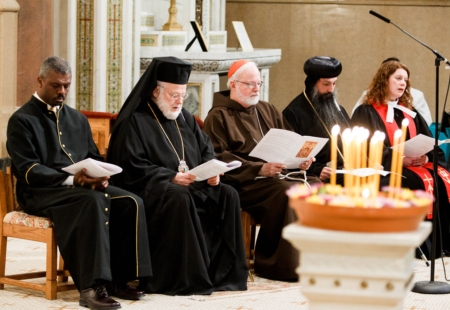 BOSTON -- At an ecumenical service honoring Christian martyrs, Jan. 25, Cardinal Seán P. O'Malley described martyrs not as figures cast in marble but as human beings of flesh and bone -- in some cases people he knew.

Observing the Week of Prayer for Christian Unity, Christians of various traditions and denominations from all over Boston and New England gathered at the Basilica of Our Lady of Perpetual Help, swelling the crowd to over 500 gathered in prayer.

Vito Nicastro, associate director of the archdiocese's Office for Ecumenical and Interreligious Affairs, which worked with the local Community of Sant'Egidio to organize the event, called the ecumenical gathering the largest of its kind in his 23 years with the office.

The service was attended by representatives of dozens of Christian communities and groups including Mainline Protestant, Orthodox, Oriental Orthodox, Historically Black and Evangelical churches, as well as numerous Catholic parishes, ethnic communities and rites.

Rev. Jeffrey Brown, a minister of the Twelfth Baptist Church in Roxbury; Rev. Laura Everett, executive director of the Massachusetts Council of Churches; Greek Orthodox Metropolitan Methodios; and Bishop David, the Coptic Orthodox bishop of New York and New England joined Cardinal O'Malley on the altar during the prayer service.

"Dear brothers and sisters, the precious heritage which these courageous witnesses have passed down to us is a patrimony shared by all Christian churches. It is a heritage which speaks more powerfully than all the causes of division. The ecumenism of the martyrs and the witnesses of the faith is the most convincing of all. To the Christians of the 21st century it shows the path to unity," Cardinal O'Malley said, recalling the words of Pope John Paul II.

Prayers at the service centered on martyrs killed for their faith in the Gospel in modern times.

In the homily, Cardinal O'Malley spoke about martyrs he knew throughout his life.

"As cardinals, when we are invested with the robes of our office, we are told that the red robes are a reminder that we should be ready to shed our blood for the faith. I have had the privilege of knowing two cardinals who did just that," he said.

Detained for 13 years -- nine in solitary confinement -- in a Vietnamese prison camp for "reeducation" by the communists, Cardinal Nguyen Van Thuan, later died from cancer.

Another peer of Cardinal O'Malley was actually killed standing up not to an oppressive regime, but witnessing to moral courage as a Christian.

"The other cardinal I knew was Juan Jesus Posadas Ocampo, the Archbishop of Guadalajara, brutally murdered by the Tijuana drug cartel," Cardinal O'Malley said.

He said the martyr he knew most intimately was Archbishop of San Salvador Oscar Romero, shot while celebrating Mass in 1980, but the violence in El Salvador continued even through his funeral.

Cardinal O'Malley said a bomb went off in the mass of mourners in the square outside the cathedral, before soldiers began firing into the crowd. It was Palm Sunday.

"Forty people were killed. After the crowd fled, all you could see in the plaza were shoes and sandals that in the panic had been pulled off of people's feet by people pushing and trying to get away, and of course all of the palm branches lay all over," Cardinal O'Malley said.

Processions brought four crosses to the altar representing parts of the world whose lands saw the blood of martyrs spilled in carnage caused by political upheaval, crime and war.

Community of Sant'Egidio member David Sulewski read names of martyrs from the regions represented, as Sant'Egidio community members lit candles at the altar for each name. After each procession, laity, clergy and faith leaders of various Christian traditions offered prayer intentions for the martyrs.

"In Egypt, we remember the martyrs of the Coptic Orthodox Church, martyrs from childhood, boys and girls, men and women, elders, priests, deacons, servants, nuns, and monks from all generations all over the land of Egypt," Sulewski said, as a procession brought in a crucifix to honor martyrs in the Middle East, Asia and Oceania.

The procession also honored a Chaldean bishop kidnapped and killed in Iraq in 2008, a Protestant fatally shot in Pakistan in 2006, a Catholic layperson who defended the rights of indigenous people shot and killed in the Philippines in 2013, more than 10,000 Koreans killed in the 19th century, along with other individuals and groups killed in the region.

"We remember Reverend Dr. Martin Luther King, Jr. and all the martyrs of the black churches who lost their lives in the struggle for freedom, equality, justice and peace," Sulewski said.

The third crucifix honored those who have lost their lives for the Gospel in Africa. The ceremony noted the names of martyrs in Africa from Algeria to Madagascar, such as Anglican Bishop Janani Luwum shot to death at an army barracks after the government of Uganda publicly claimed he was killed in a car accident.

The final crucifix brought to the altar honored martyrs of Europe -- Orthodox, Catholic and Protestant -- killed for their witness to the Gospel against Nazis, Soviet Communists and the Italian crime syndicate the Camorra.

"We remember Saint Chrysostomos, Greek Orthodox Metropolitan Bishop of Smyrna. He was killed by a lynching mob during the sacking of Smyrna by Turkish troops at the end of the Greco-Turkish War of 1919-1922," the reader said.

Rev. Brown, known as an anti-violence advocate in Boston, said he even felt moved to make the sign of the cross along with the cardinal during the service.

"I am in a beautiful basilica, and I am in an ecumenical service with my brothers in the faith and my sisters in the faith, and so I honor them by doing that," he said.

After the service Metropolitan Methodios said he felt joy in seeing other Christians coming out publicly to give witness, particularly in the light of Christians dying for their faith in recent events.

Egyptians Copts told their personal accounts of persecution in Egypt after the gathering.

A young man said his brother fled Egypt as a soldier when Muslims in the Egyptian army began a kind of purge of the ranks after the Arab Spring. An older man who served in the army there said the same actually happened to him years earlier, but one woman summed up the feeling of Egyptian Christians living in the United States when tragedy strikes the community in Egypt.

"Any time we hear the news, it always strikes close to home just because there are so many little churches and it's a small community. So, any time anything happens, we worry that we know someone there. Even if we don't, I mean, we're all family. It affects us all," said Monica Gabriel, who attends St. Mark's Coptic Orthodox Church in Natick.

Bishop David said the suffering endured by the people shows the life of the Coptic Church.