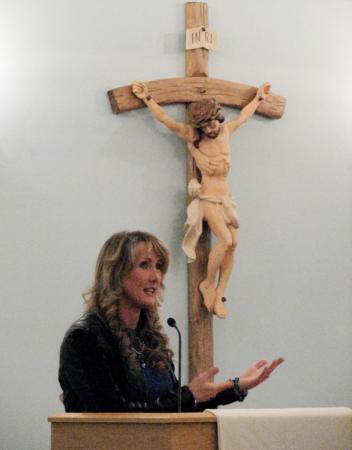 Rebecca Kiessling, a national speaker for the 40 Days for Life campaign who was conceived by rape and targeted for abortion, calls participants in the Massachusetts 40 Days for Life prayer campaigns her "heroes." Pilot photo/Christine M. Williams

MEDWAY -- Kicking off the six Massachusetts 40 Days for Life campaigns, national speaker Rebecca Kiessling encouraged participants, saying that their presence can have a "profound impact" on abortion-minded women. Just knowing that a total stranger is willing to stand outside to offer prayers for them can lead to a conversion of heart.

The event, sponsored by the Boston 40 Days but promoted by the other campaigns, was held at the Marian Center in Medway on March 2. Six Massachusetts locations -- Attleboro, Boston, Haverhill, Lynn, Springfield and Worcester -- are participating in this spring's campaign, which runs from March 5 through April 15.

The first 40 Days for Life was conducted in College Station, Texas in 2004. Since then, 600,000 people have participated in 522 cities and 21 countries. Records show 8,245 lives saved from abortion, 88 abortion workers quitting and 44 clinics closing. The spring campaign will be in 251 communities across North America.

Kiessling, a lawyer, also shared her personal story. She was adopted at birth and met her birth mother after she turned 18. Then, she learned that she was conceived during rape and that her birth mother considered abortion. Her birth mother was abducted at knife point by a serial rapist. Two times she scheduled illegal abortions, but canceled both appointments because she feared for her own safety.

The birth mom told her that if abortion had been legal, Kiessling would be dead.

"I just barely made it," she said, referring to the fact that Roe v. Wade legalized abortion not long after she was born. She described the knowledge that she had been targeted for an abortion as a "near-death experience."

Kiessling said that she almost received the death sentence for her biological father's crime. She is "100 percent pro-life; no exceptions; no compromise" and challenges everyone who is pro-life to view all unborn life as worth saving.

During the last presidential campaign, Kiessling said she met Gov. Rick Perry of Texas, who was running for the Republican nomination. Perry was a rape-exception pro-life candidate. She told him her story, adding that she views people who are 100 percent pro-life as her "heroes."

"Would you be my hero?" she asked him. The next day Perry signed a pro-life pledge without a rape exception.

"He was the governor of Texas. He had heard all the arguments before," Kiessling told the 40 Days participants, "Stories pierce the heart in a way arguments cannot."

Some people argue that in order to pass pro-life laws, exceptions must be made for the "hard cases" like children who have fetal anomalies or were conceived in rape or incest. They make up about one percent of abortions, and sometimes people believe that saving the 99 is more important, she said.

Kiessling said that such an argument always reminds her of Jesus' parable of the lost sheep. In it, the shepherd leaves the 99 to save just 1. She encouraged those who pray outside abortion clinics to do the same.

"Jesus was all about saving the one," she said. "God doesn't forget His children and neither should we, and I thank you so much for your willingness to be out there. You really are my heroes."

Before Kiessling's comments, Father Michael McNamara celebrated Mass for the group. During his homily, he spoke about the importance of starting of the 40 Days for Life campaign with prayer. He called on participants to be humble and examine their own sins so that they can be close to God and carry His light to the abortion clinics.

"If we're not being Christ out there, we may as well go home," he said. "We are the ongoing incarnation."

After the event, Rita Russo, Boston's campaign coordinator, told The Anchor, "This is a spiritual battle, and we want to get off on the right foot. We want God's blessing. We want to be fortified."

She said that leadership from all six Massachusetts 40 Days met after the fall campaign in an effort to support each other.

"We hope to gather again because we need each other," she said.

Ron Larose, a coordinator for the Attleboro campaign who also attended the Medway event, said that 40 Days will exist as long as there are clinics performing abortions.

"We're faithful to the message, and we're doing it campaign after campaign. We're here as long as it takes," he said.

For more information on the six 40 Days sites in Massachusetts and upcoming events, visit www.40daysforlife.com/location.