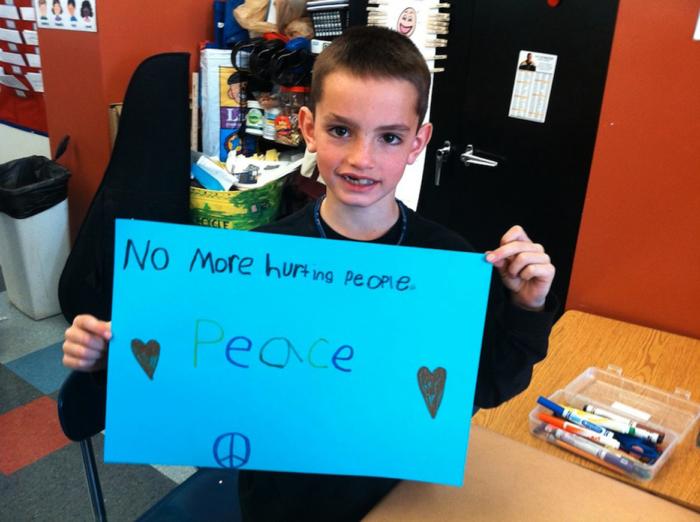 100 people will run this year's Boston Marathon in honor of bombing victim Martin Richard. They will be raising funds for a charity established by his family to promote Martin's message of peace. Courtesy photo

BOSTON -- "No more hurting people. Peace," read the poster held by Martin Richard, the youngest life lost on Marathon Monday last year. The image of the smiling eight year-old boy accompanied by his message against violence stood in stark contrast to the twin explosions that killed 3 and injured an estimated 264 others on April 15, 2013.

This Patriots Day, April 21, 100 people will run the Boston Marathon's 26.2 mile course in honor of Martin as part of Team MR8, named for Martin's initials and his age. They are raising funds for the Martin W. Richard Charitable Foundation, a charity established by his family to promote Martin's message of peace.

According to the foundation's website, TeamMR8.org, Martin's view of peace meant more than non-violence. It included "togetherness, teamwork, fairness, sportsmanship, inclusion, and the prevention of bullying."

Larry Marchese, spokesman for the Richard family, said the foundation would like to invest in education, athletics and community. The organization will contribute to peace curriculi for schools and fund projects like peace corners in public libraries. The latter would give children access to books that explain what peace means and biographies on famous peacemakers like Martin Luther King Jr. and Mother Teresa.

Marchese added that Denise and Bill Richards, Martin's parents, hope the foundation will bring something positive out of Martin's death. At the marathon last year, Martin's parents and two siblings were with him at the finish line. Denise suffered a head injury and loss of sight in one eye, Bill had burns on his legs and hearing loss and Martin's younger sister lost her left leg. His older brother was physically unharmed. In press releases, the family repeatedly cited their Catholic faith as a source of strength in their grief and healing.

The foundation's first fundraising effort will be the 2014 Boston Marathon. Each runner for the foundation has promised to raise at least $7,500.

Frank Fumich, an extreme marathoner from Arlington, Va., has already run the Boston course. He and friends collectively ran 18 marathons covering the distance from the Pentagon to the Boston Marathon finish line to raise money for victims of the marathon bombing.

He was inspired to run this year's Boston Marathon by Martin.

"He was a young boy and had his whole life in front of him," he said. "I just thought about my girls and, God, what his parents must be going through."

Fumich ran his first marathon 17 years ago for his aunt who was dying from a brain tumor. Fumich, a Catholic, offered up his pain for her and continues to offer up his pain for a worthy cause with each subsequent marathon. He also prays while he runs, asking God to give him strength.

"There's nothing special about me. I'm not really that talented," he said. "Often, I am literally saying Hail Marys if things get really bad, or talking to my dad who passed away years back."

Jamie Przypek, a casual runner from Springfield, said he hit "the wall" for the first time during the Hop-21, the marathon training run held on March 29 this year. The 21-mile course runs from the Boston Marathon starting line in Hopkinton to just past Heartbreak Hill -- the steep, final hill before the finish line.

Przypek, also Catholic, said God answered his prayer for strength, and he was able to finish. He added that the thought of Martin kept him going.

Diane Pokorny Wilson, a personal trainer who lives in Brookline, said she carried a picture of Martin during a half Ironman Triathlon last year.

"I keep Martin so close to me," she said. "I feel that I'm being lifted a bit by his spirit. I try to keep him with me in my thoughts, and he's in my prayers."

Wilson's son was friends with Martin, and she got to know him when she trained a group of students to run a half marathon.

"He was a kid with a huge smile and a huge heart, and he loved life," she said.

Wilson, a Catholic, said she has been inspired by the Richards' ability to draw strength from the Church.

"Your kids are your life. To lose a child is unimaginable," she said. "Their faith is utterly amazing."