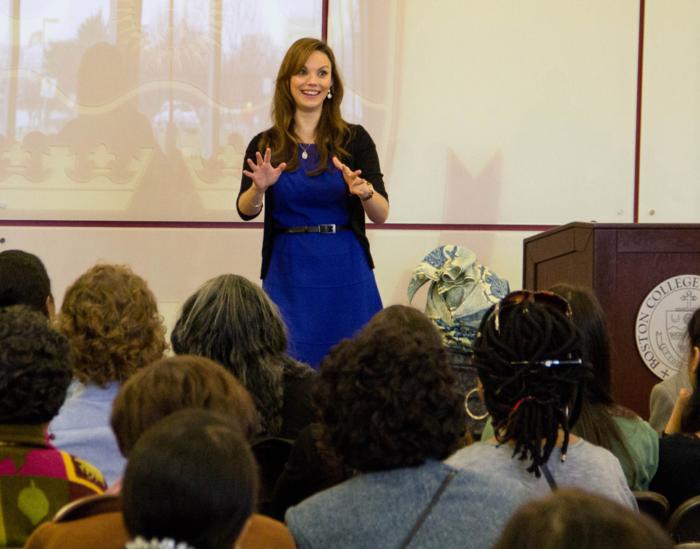 "What an amazing time to dive into that conversation of how much Christ loves us, how much he's always there for us, and no matter what culture we're from, what language we speak, the language of Christ is universal. The language of his love is universal, and that's what connects us today," Darrow said.

The Catholic Family Festival, presented April 26 by the Office of Outreach and Cultural Diversity at Boston College High School, also featured an outdoor barbecue with food from the different cultural communities in the Archdiocese of Boston, a procession of flags from various nations, celebration of Mass, and programs for children of various age groups.

Darrow, 34, described the faithful as a family united under God the Father, as she gave the English-language keynote address at the day-long event with tracks in three languages.

But she also spoke about a world in which people put their own priorities higher than their love for God, turn their back on commitments to family, and disconnect from faith -- a reality she experienced first-hand before her return to the Catholic faith.

"I think we have in our world today... misunderstood love. We have misunderstood what it really means, or we might not even know what it means, and so we redefine it. We want to reorganize it to fit ourselves, our lifestyle, our time, and our life. I know for myself I wasn't very far from a disordered understanding of love," she said.

She spoke about a recent divorce between a Hollywood couple, and how the media and culture promote a false image of large families as a burden to individuals.

"Anybody who talks about big families being a problem, I don't think they understand what families do, right?" she asked.

She described families waiting for the new arrival of a birth, praying together as her family did when she was young, and providing a place to express something people need to understand -- love. She put her story of redemption in that context, starting with her failure to understand love.

"I didn't understand really what love meant. I did not have a working definition, and that's one thing that will unite us all over the world, regardless of culture, country, language, color -- love unites us, and we all need a working definition of love," Darrow said.

Her story showed how families can do that.

Darrow described some of her failures to work out her own definition of love, as a contestant on "America's Next Top Model" who went on to work as a professional model making a paycheck that she said "finally had a comma in it."

"There's nothing real about reality TV, right?" she asked the audience.

She said doors had no hinges on them in the housing provided during the reality television shoot, cameras followed contestants everywhere they went, all male camera crews even filmed the constants in the shower, which she said had no curtain on it.

"Is that upholding human dignity? Is that upholding just an ounce of modesty? No. And here's the thing, it's a TV show. That's what it's supposed to be. It's supposed to get ratings, and the reason why reality TV exists is because we want it to exist," she said, and added that merely changing the channel could make a difference.

Darrow experienced the rejection of reality television first-hand as the second contestant "eliminated" from the show, before she moved to New York to pursue full-time work as a model.

On one of her photo shoots, she took a stand and walked out after she had a vision of herself before Jesus holding the results of her life's work in her hands, which she described as "nothing." The photographer told her to stay, that it was OK, but her encounter with her faith and the feeling of being used told her otherwise.

"Every girl feels like this in the beginning, so it's OK for us women to feel used? It's never OK for anyone to feel used," she said.

Following that experience, she called her father in Oklahoma, where she grew up in her Catholic family of six children who attended Mass and prayed the Rosary together.

Her father, a tech worker who worked the family farm in the evening, told her upon his arrival that going home would include going to the spiritual home he and her family raised her in -- the Catholic Church.

"I am here to take you home, and Jesus is home. The Church is home," she said her father told her.

For Darrow that meant a stop at a church in New York for confession.

Robert Gakwaya, a parishioner of St. Irene in Carlisle, told The Pilot he will take the message of the talk to heart into his new marriage.

"I just got married a few months ago, and I am still discovering what it really means to be in love with somebody," he said.

He said he had thought that God, family and friends would be three pillars of his marriage, but soon realized that God encompasses all three.

"From the talk, what I learned was, it's not about what we know, it's what we are seeking. So, don't go into love trying to get much of what you expect, what people think about it, but go there just as an open mind, just seeking to figure out what it is. That's where you come to Jesus, because it's the answer to everything," he said.