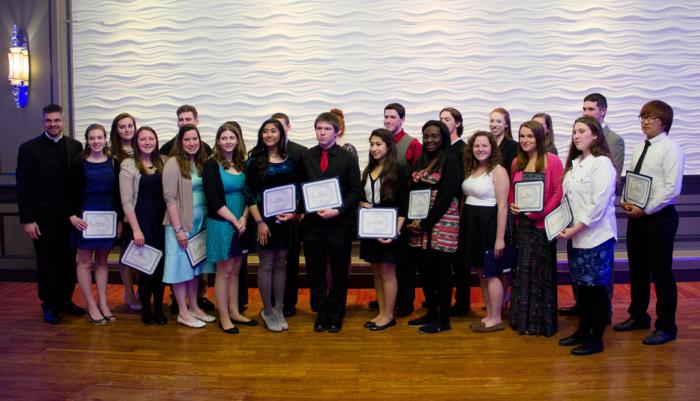 RANDOLPH -- The Office of Faith Formation of Youth and Young Adults Awards Banquet at Lombardo's in Randolph, April 29, recognized youth and young adults for their work evangelizing in their parishes and communities two days after the canonization of two saints with a particular devotion to young people.

The canonizations of Pope John XXIII and Pope John Paul II set a thematic tone for the evening, as Father Matt Williams, director of the office, introduced Father Michael Harrington for the opening blessing.

"Heavenly Father, we ask you to pour out your blessings upon us this night. We ask the intercession of two new and great saints for our Church, St. John XXIII and St. John Paul II. They had a bold vision. They believed that the Catholic Church was relevant in a world that was constantly changing and searching for deeper meaning. They knew Jesus was the hope of this world, and they knew that young people were called to be a witness to that hope," Father Harrington said.

Cabinet Secretary for the New Evangelization Janet Benestad introduced Father William T. Kelly, pastor of St. Mary of the Assumption in Dedham and former director of the Office for Clergy Support and Ongoing Faith Formation, but not before she conveyed a word of thanks on behalf of the Archdiocese of Boston, Cardinal Seán P. O'Malley, and episcopal vicar for the New Evangelization Bishop Arthur Kennedy to those receiving awards.

"I offer to those who are receiving awards tonight our deepest congratulations. Thank you for all that you do to spread the love of Christ to your family, to your friends, to your neighbors, to your teachers, to everyone you know, and thank you for witnessing to your friendship with Christ to the whole of our archdiocese," she said.

Middle school-age youth, high school-age youth, and adult leaders who demonstrated their faith by serving their parish and wider communities received awards. Adults who serve as Christ-like role models and mentors to youth and young adults in scouting and ministry also received recognition.

Giving the keynote, Father Kelly noted the thematic significance of the two new saints for the award ceremony.

"We are here tonight to honor young men and women who would make both of these popes proud, and to honor those who minister to them," he said.

The archdiocese presented Father Albert Stankard, pastor of St. Stephen Parish in Framingham, the St. Don Bosco "Friend of Youth" Award, given annually to a priest to recognize service to high school and middle school youth.

"Someone said once that adolescence is such a good thing, it shouldn't be wasted on the youth. I don't agree with that, and they let me keep my adolescence until now," he said.

He invited those from St. Stephen Parish who accompanied him to the banquet to stand, as he recognized their role that he said helped him to be "a friend to the youth."

Other adult honorees received the Light of the World Award, the St. Elizabeth Ann Seton Award, and the Blessed Pier Giorgio Frassati Award for their work in ministry to youth.

Sean Cote, 18, who volunteers at his parish St. Margaret Mary's in Westwood received the St. Timothy award, the highest recognition given by the National Federation for Catholic Youth Ministry. Speaking with The Pilot, he credited the support of his parish and people there.

"It's a volunteer thing, and you don't expect anything back. I never honestly expected to get any award for it. It's just you want to help out, you want to help other people. Once you have done an event like the Relay for Life, or helped in the community, and you see what you are actually doing, it really makes an impact," Cote said.

His mother, Barbara Cote, said she was proud of her son, but that she appreciated the support he received from the parish religious education director Karlene Duffy.

"He's an awesome, awesome kid. He's very giving, very kind, and it was Ms. Duffy at St. Margaret Mary that gave him the opportunities. He just rose to them," she said.

Recipients were nominated by their respective parishes or Catholic entities and selected by the archdiocese.

"To you who are at the beginning of the journey of life I ask, have you thought about the talents that God has given you? Have you thought about how you can put them at the service of others?" Father Williams quoted the pope, before pointing out that those honored clearly had.