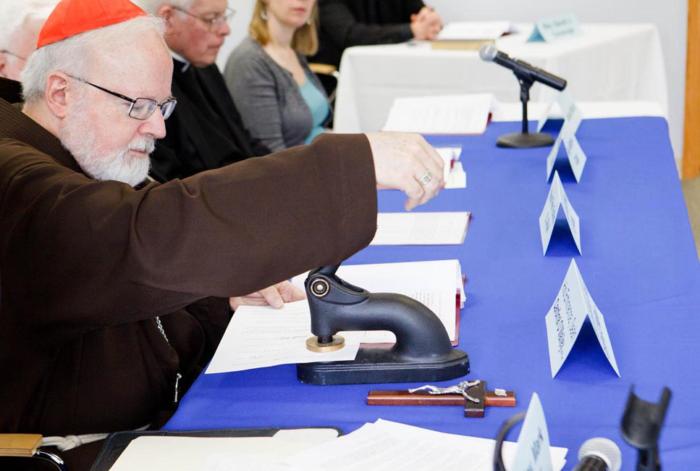 Cardinal O'Malley impresses his seal on a document to closes the local phase of the canonization cause of Opus Dei priest Father Joseph Muzquiz, May 22. Pilot photo/Gregory L. Tracy 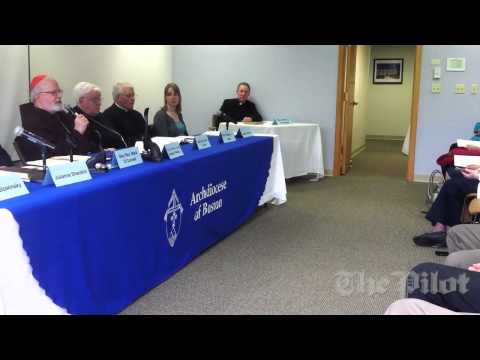 BRAINTREE -- Cardinal Seán P. O'Malley presided over the closing session of the diocesan phase of the cause of canonization for Opus Dei priest Father Joseph Muzquiz, May 22, at the Archdiocese of Boston's Pastoral Center in Braintree.

The closing session ended the local stage in Father Muzquiz's cause of canonization and the process will now move to Rome.

"Although the process is just beginning, even reflecting on the holiness of life of this great priest is of benefit to all of us, and we pray that his cause will advance quickly and that others will continue to be touched by the testimony of his life and his holiness," Cardinal O'Malley said.

During the ceremony, the cardinal approved the evidence collected in the case -- a stack of boxes that contained over 9,000 pages of evidence detailing the life of the potential saint.

Father Muzquiz was born in 1912 in Badajoz, Spain. In college, he met St. Josemaria Escriva de Balaguer, the founder of Opus Dei, just before the Spanish Civil War broke out. He joined Opus Dei in January 1940, and was ordained as one of the first three Opus Dei priests in 1944.

At St. Josemaria's request, in 1949 Father Muzquiz came to the United States to start Opus Dei's apostolic work, first in Chicago, then in other cities. In the late 1950s, he traveled extensively, laying the groundwork for Opus Dei's beginnings in Asia, and then working in Rome, Switzerland and Spain.

In 1976 he returned to the United States to become the head of Opus Dei in the U.S.

On June 21, 1983 Father Muzquiz died after suffering a heart attack while teaching a class at Arnold Hall Conference Center in Pembroke.

Since Father Muzquiz is buried in Boston, the investigation into his cause for sainthood fell to the Metropolitan Tribunal of the Archdiocese of Boston. The archdiocese opened his cause for canonization in 2011.

In the opening session of the cause those working on the case swore to do their duty diligently and honestly.

At the closing session, those who worked on the case swore that they had in fact fulfilled that duty. Retired auxiliary Bishop of Boston Emilio S. Allue, who represented the cardinal during the investigation; Jessica MacMaster, who worked as a transcriber; Father Rodney J. Copp, who served as promotor of justice; Lily Holowinski, who served as a notary during sessions; Julianne Shanklin, who stamped and signed each of the more than 9,000 pages; and Father David Cavanagh, who served as postulator of the cause of sainthood for Father Muzquiz in the archdiocese each took the oath.

Father Mark O'Connell, the archdiocese's judicial vicar, also took an oath. He later explained for The Pilot why some aspects of the session may have appeared redundant or even antiquated.

"You can see, because of all these things, how hard it would be to fake this and to do it fraudulently," he said.

Father Cavanagh, a priest of Opus Dei, knew Father Muzquiz personally for seven years before his death in 1983, and spoke with hundreds of people who knew or met Father Muzquiz throughout the United States and the world as part of his investigations.

"I must, as a matter of justice, express my deep gratitude to your eminence, to this tribunal, to the judicial vicar, and all the tribunal staff for your unstinting dedication, professionalism, kindness and patience with the postulator during these years," Father Cavanagh said, at the closing session.

The boxes containing the evidence gathered through the diocesan investigation, including declarations from witnesses and other documents, will be sent under seal to the Vatican's Congregation for the Causes of Saints.

Father Cavanagh was appointed carrier for the copies of the documents, which he will accompany to Rome.

"Many steps must still be taken before the Church can give its definitive judgment regarding the Servant of God. Today, I can say that many people from around the world pray to the Servant of God with confidence that in him, they have a powerful intercessor before God," he said.

Several people who knew Father Muzquiz were on hand for the closing session.

Janis Carroll, 71, who works at Arnold Hall, said Father Muzquiz touched her life and the lives of other Opus Dei members in his service as a priest.

"He was right there for us. He was always encouraging. I never went to him in the confessional where I didn't get a lot of encouragement even when I would think something was really impossible to conquer or to do," she said.

Father Dick Rieman, a priest of Opus Dei, who appears in the documentary film "Everyday Holiness: The Life of Father Joseph Muzquiz," knew and worked with Father Muzquiz in the 1950s.

Father Rieman described the potential saint's humility as "child-like." He said the world today would have no problems if it mirrored that humility.

"If the world we are living in, you and I, were just child-like, like he was, in front of Jesus, no problem," Father Rieman said.

John F. Coverdale, the author of the book "Putting Down Roots -- Father Joseph Muzquiz and the Growth of Opus Dei" was also present for the closing session.

"To see the Church taking this admittedly preliminary step, but a step of saying, yes, this man appears to have been an exemplary holy person is really quite wonderful," he said.