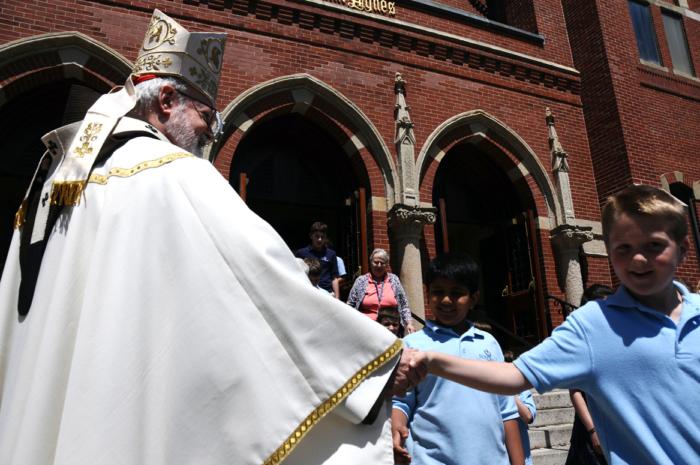 'Yesterday (5/29), I visited St. Agnes in Arlington, Father Brian Flatley's parish, to join in their celebration of the 125th anniversary of their school.' Pilot photo/CardinalSeansBlog.org

On Sunday (5/25) I was in New York City to celebrate a Mass at St. Patrick's Cathedral for the Argentine community for the Feast of Our Lady of Lujan. There were about 1,000 people in attendance. At the moment, St. Patrick's Cathedral is under construction and full of scaffolding, but it was a beautiful celebration. The choir, the Grupo Coral de America Santa Rosa de Lima, sang the very famous Misa Criolla by Ramirez. In fact, it is the recording of the same Mass that the Holy Father gave me when I visited him when he was Archbishop of Buenos Aires. When he gave me the recording, the Holy Father said it is one of the best renditions there is. I told the people that I hope he will not be offended when I tell him that they sing the Misa Criolla better at St. Patrick's than in Buenos Aires!

I also told the people that, on two occasions, I visited the Basilica of Nuestra Senora de Lujan outside of Buenos Aires and I was so pleased because there is a huge altar in the sanctuary dedicated to St. Patrick. Each year there is a pilgrimage of Irish-Argentinians to the sanctuary, and so I thought it was very fitting that we were celebrating with Argentinians at St. Patrick's -- sort of turning the tables!

I was back in Boston for our regular meeting of the Archdiocesan Pastoral Council on Tuesday evening (5/27). For the past several months the Faith Formation and Evangelization Committee Sub-Committee has been reflecting on the Holy Father's Apostolic Exhortation, ''Evangelii Gaudium."

The committee offered an inspiring presentation that integrated the insights of Disciples in Mission, "Forming Intentional Disciples" by Sherry Weddell and the Joy of the Gospel. The conversation focused on practical ways that each one can be an effective evangelizer. Several APC members participated in the evangelization training offered through the Office of the Episcopal Vicar for the New Evangelization. Two APC members offered witness talks for us. Maureen O'Brien shared the witness talk that she developed during the archdiocesan training. Casey Grant shared the talk that he had given during Lent as part of "What's Your Next Step?" offered by the Belmont collaborative parishes of St. Joseph and St. Luke. Witness talks are a very important part of our evangelization efforts.

Wednesday (5/28), we had the luncheon for the newly ordained priests and their families. There is always such a flurry of activity around the time of the ordination that I usually do not have time to greet the families of the ordinandi. So, during the week following the ordination, we host the newly ordained and their families for luncheon here at the Pastoral Center. At the end of the lunch, I give the families a small gift as a sign of our appreciation. I tell the mothers, "Thank you for your gift to us, now I have a gift for you."

That evening was the 10th Senior Priests Dinner at the Boston College Club sponsored by the Order of Malta. We are so grateful to Jack Joyce and Jim O'Connor for all the efforts they put in to making the dinner happen, and I am glad so many of our senior priests were there to enjoy it. The entertainment was provided by Bob Crane and the Treasury Notes, who sang many oldies-but-goodies. A wonderful time was had by all.

Yesterday (5/29), I visited St. Agnes in Arlington, Father Brian Flatley's parish, to join in their celebration of the 125th anniversary of their school. They have a very glorious history to celebrate. The school has been a great bastion of Catholic education and culture with the help of the Sisters of Notre Dame and Sisters of St. Joseph who have both been involved in teaching at that school over the years. Many vocations have come out of that school, and I was delighted to be celebrating the Ascension Thursday Mass with them to mark the 125th year.