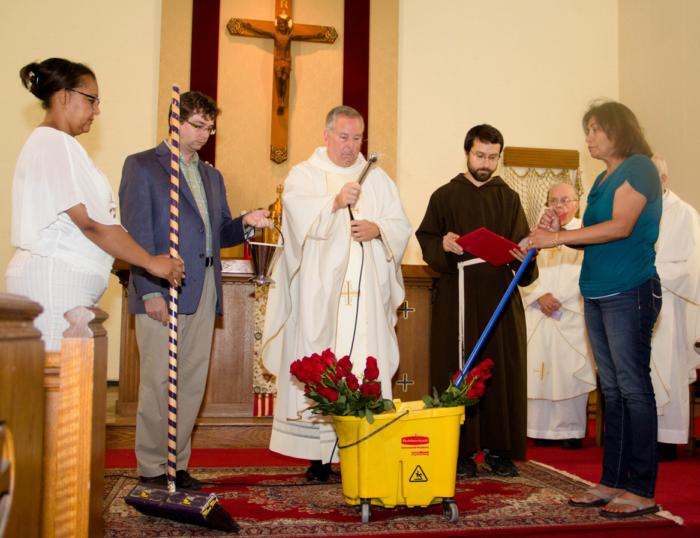 Episcopal Vicar of the Central Region Father James Flavin blesses a mop, bucket and broom symbolizing the tools of the modern laborer during the "Workers' Mass for the Dignity of Labor" at the Chapel of Our Lady of Good Voyage in South Boston, Aug. 30. Pilot photo/Christopher S. Pineo

SOUTH BOSTON -- The Archdiocese of Boston showed support for the rights of workers in the context of recent upheavals, Aug. 30, as workers gathered for Mass at a chapel famous for serving workers on the South Boston waterfront.

At the Chapel of Our Lady of Good Voyage, Episcopal Vicar of the Central Region Father James Flavin called for better wages and greater dignity for working people, and repeatedly stated the support of the Church in the Archdiocese of Boston.

Many of those who attended the "Workers' Mass for the Dignity of Labor" were members of the Service Employees International Union Local 32BJ, which helped organize and promote the Mass. The union had fought a Massachusetts Bay Transit Authority plan announced in 2013 to cut the jobs of near 100 workers who clean stations and facilities in and around Boston. The job cuts that were planned for Sept. 1, Labor Day, were called off just days before they were to have taken effect.

The Labor Guild, an agency of the archdiocese that promotes labor-management relations, also helped organize the Mass.

Speaking to The Pilot before the Mass, guild executive director Allyson Every, said the Church encourages union support for workers who might otherwise go unheard "in an unbalanced power situation -- at least balancing it a little bit."

As he began his homily, Father Flavin welcomed the congregation on behalf of Cardinal Seán P. O'Malley.

"Our story, the Christian story, begins with a homeless family forced to immigrate to a foreign land, fearful of those who control the wealth of their nation. They wanted a better life for their son and endured trials and hardships much like we do today, but in the midst of all of their trials and tribulations they trusted that God would be with them and hear them," Father Flavin said.

The chapel -- commonly known as the Seaport Chapel -- hosted about 100 workers and their families, many of them immigrants.

"We gather here this afternoon, on Labor Day weekend, in this chapel built by laborers. Many years ago the longshoreman's union built this building and asked God to protect our union workers in the City of Boston and to protect those who go to sea," he said.

Built in 1952 to serve seamen, longshoremen, and waterfront workers, the chapel provided a simple backdrop as Father Flavin blessed a symbolic mop, bucket and broom -- the tools the workers use each day.

"We are here to ask God's blessing upon our work, and to be reminded again in word and sacrament of God's abiding presence in our lives, and to seek the justice that upholds the dignity of all workers in our world. Like St. Joseph the Worker and his wife the Blessed Virgin Mary, we too need to know that God is with us and trust in God," Father Flavin said.

At the time of the Mass, the union and workers were preparing for a Labor Day rally to support recent attempts by workers at Logan Airport to unionize in the face of a conflict over wages that developed in 2012.

"I offer thanks of our great union and their families to Father Flavin for offering this Mass at a time, I think, that we needed it," said Roxana Rivera, district director of SEIU 32BJ, at the end of the Mass.

At a gathering after the Mass, State Rep. Daniel J. Ryan also noted the timeless connection between Christianity and the nobility of work in the effort to feed one's family.

"These issues have not changed. It's about loaves and fishes and feeding the masses, and everybody taking care of each other," he said.

Those gathered at the reception also heard from Judith Mendez who works at a kiosk checking bags at Logan Airport. She spoke about workers facing a need to unionize in the face of low wages and poor working conditions.

"I am trying to get a union, because I am trying to make my life better and move my life forward for my children, not just for me but for everybody," she told The Pilot through a translator.

Everett resident Inmer Flores said he isn't Catholic, but as a 13-year employee cleaning the Ruggles, Roxbury Crossing, and Jackson Square stations on the MBTA's Orange Line, he felt the need to show solidarity for his fellow workers in prayer.

"It is important to support because if we lose the job, it will affect the families, our families," he said.

He said loss of part of the janitorial workforce would impact T riders as well. When the local union protested the cuts earlier in the year, they marched in solidarity with riders opposed to a fare hike, according to Local 32BJ's website.

At the reception, Father Flavin restated the support of the local Church for the workers.

"Thank you for being here and know that Cardinal Seán and the archdiocese are with you all the way," he said.