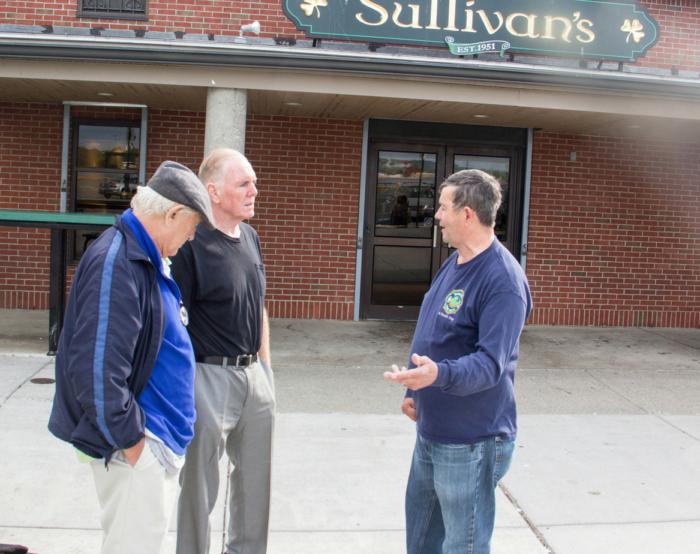 BRAINTREE -- Beginning this month, former Vatican ambassador and Boston mayor Raymond L. Flynn will be adding his voice to the opinion section of The Pilot. His pieces will also be featured regularly in Echoes, a forum for Catholic commentary at TheBostonPilot.com.

Speaking Sept. 16 after a morning walk at Castle Island in South Boston, Flynn explained how his background impacts his perspective, his work, and his writing.

"This is where I get, and have, an opportunity to talk to so many people from all different backgrounds," he said, gesturing to the South Boston waterfront path.

With airplanes taking off overhead and stacks of cargo containers nearby, he said getting out and speaking with people face-to-face has given him a grass-roots perspective that has informed his entire career.

Flynn grew up the son of a longshoreman and a cleaning woman in South Boston. His Irish Catholic family attended Gate of Heaven Parish in South Boston with their five boys.

He said his parents raised him to respect the teachings of the Catholic Church and apply them on behalf of the marginalized, the poor, and the disenfranchised.

"I try to treat people with respect, and try to practice what I learned from my neighbors, from my family, from my Church. I consider myself well educated, but I really learned the values of family, community, and faith. That's what's important to me," he said.

Flynn and his wife Catherine have six children and 17 grandchildren. He coaches baseball and soccer in a Braintree league sponsored by the Teamsters Union, as a way of helping his grandson Braeden, who has a rare condition that impairs his ability to walk or speak.

While in his early years it looked like he might be heading for a professional basketball career, instead he made his mark on Boston through a life of public service. He served as a state representative and Boston city councilor in the 1970s before going on to be elected mayor of Boston in 1984, a position he held until stepping down to become Vatican ambassador in 1993.

Throughout his life in public office, he maintained a reputation of never forgetting his working class roots. Flynn still lives in the neighborhood where he grew up and still attends his home parish.

"Of course, I'm right here at the waterfront. My father worked here for 50 years and my wife's father worked here. I'm a union dock worker myself. So, these are real working-class, family-oriented people, so you get a good point of view of decent people, listening to their stories," he said.

Though he holds a bachelor's degree in public administration and a master's degree in education he said he still considers what he hears from people he meets to be the best education.

"It's not the titles that I have had that have made me an informed person, it's listening. I consider myself a pretty good listener, which I like to talk about, which I like to write about. You know, those are valuable experiences that you can't learn at a college or a university," he said.

In recent years Flynn has continued to serve as a regular commentator for local media, offering a Catholic perspective on current events. Recently, Flynn has been outspoken on behalf of Catholics in Iraq who are suffering violent persecution at the hands of the Islamist group calling itself the Islamic State.

"I don't try to be politically correct. Everything is based on what I believe, what my faith has given me, and what I hear people say," he said.

Whatever issues arise in the future, Flynn said he plans to advocate with his conscience on behalf of Catholic social teachings in order to promote a more just society.

The 75-year-old said he rejects the labels conservative, liberal, Democrat, or Republican, and keeps his conscience informed by the teachings of the Church and the everyday people he meets.

"It's like the Catholic Church, you know it's rooted in truth. You know it, you may disagree with it, but this is what I believe, and that's what I'm going to continue to do," he said.

"First of all, Ray has a local perspective of being the Mayor of Boston, but also a faith-filled Catholic," Father Casey said.

Flynn served in Catholic advocacy groups, such as the Catholic Alliance, Catholic Citizenship, and Catholics for the Common Good.

"He brings a worldwide vision of how he approaches his faith and what issues are important to him in following that faith. So, I think he'll bring a wonderful perspective of both the local scene and also issues that affect the entire world, and especially the Catholic population," Father Casey said.