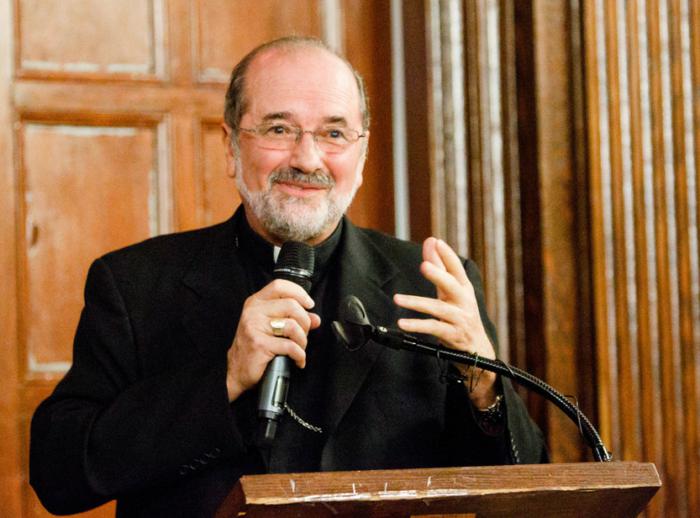 Bishop da Cunha addresses members of the order at the dinner held in the seminary refectory following the Mass. Pilot photo/Gregory L. Tracy

Making his first public appearance in the Archdiocese of Boston since his installation as the new bishop of the Diocese of Fall River, Bishop Edgar Moreira da Cunha was the honored guest and keynote speaker at the annual Boston Area Mass and Dinner of the Order of Malta on Oct. 9.

Knights and Dames and auxiliaries of the Order of Malta, as well as several prospective members, came from the entire New England region to attend the event held in St. John Seminary in Brighton. The evening began with a Mass in the seminary chapel, presided by Bishop da Cunha.

Speaking before the start of the Mass, St. John's rector Msgr. James Moroney welcomed the bishop "on behalf of each of us who seek to build up the Church."

The homily at the Mass was delivered by Msgr. Dennis Sheehan, a Magisterial chaplain of the Order of Malta.

He urged the congregation to persevere in their prayer life.

"Communication with other people, even in an age with so many electronic devices, can be frustrating," Msgr. Sheehan said. "If communicating with others is fraught with difficulty, communicating with God is even more so. We make prayer so often complicated and beset with all kinds of obstacles of our own imagining," he said.

"We're the ones who make prayer complicated. God keeps it simple. God cares. He cares more than we can imagine," he continued.

At the conclusion of the Mass, James O'Connor, president of Malteser International USA, the relief agency of the Order of Malta for humanitarian aid, was presented with the Grand Cross -- the highest honor for a Knight -- for his many years of service.

"This is an honor which is merited and deserved and very worthy of you," Msgr. Sheehan affirmed as he present O'Connor with the cross.

O'Connor has been a Knight for 22 years, having served as area president, as well as treasurer of the national board of the Order of Malta. In addition, he is a Knight of Obedience, a vow taken by only 10 percent of the Order.

"Thank you all, because this award really belongs to the people of Boston and the surrounding areas," O'Connor said. "Thank you for reaching out and being the hands of Christ to the poor, the sick, the disenfranchised."

Following the Mass, attendees were invited to the refectory, where Bishop da Cunha delivered the keynote address.

"Anyone who knows me well enough knows I don't like to talk about myself," the bishop began, adding that he hoped his address, which was largely autobiographical, would encourage listeners to "see how God's hand has touched you, conducted you, guided you."

Bishop da Cunha spoke of how as a young seminarian in Brazil, he accepted an invitation from his superior to study in the United States.

He joked that he originally thought he would return to Brazil, "and here I am 36 years later," he said smiling.

The bishop explained how he arrived on a cold winter's day to John F. Kennedy International Airport in New York, just to find out that the letter he sent detailing his arrival time, had never been received. Completely alone, not knowing the language, he relied on the kindness of a stranger who offered to call the parish he would come to call home.

"And now I find myself in a new state, in a new diocese, in a place I've never been," Bishop da Cunha said. "I am convinced that this is really part of God's plan."

Bishop da Cunha encouraged everyone to "look at your lives, your events, your own history and say, 'Lord, thank you from bringing me here."

Speaking to The Pilot following the dinner, Order of Malta area president Damien DeVasto said "I was very impressed with Bishop da Cunha -- with his care, his thoughtfulness and his humor. It is clear he will be an extraordinary shepherd for the people of Fall River and the entire region."

"He brought everyone there a smile -- and what a wonderful thing to receive from a shepherd," DeVasto added.

The Oct. 23 gathering marks the "capstone" of the Boston Area Order of Malta's annual activities, according to DeVasto. Throughout the year, several volunteer opportunities, as well as faith-forming gatherings are offered to its members.

"As Knights and Dames, and auxiliaries, our calling is to bring the care and love of Christ to the margins," DeVasto explained. "We aim to serve those who are on the margins, who need Christ's love whether they be ill, impoverished, incarcerated -- in whatever circumstance they are in."

"We've made a vow as members to seek out and love and care for those who need it most," DeVasto said.

In fulfillment of that ideal, some of the order's activities include supporting prison ministry; cooking and serving meals at Cor Unum, a meal center in Lawrence; providing free health screenings to elderly and low-income residents in the South End of Boston.

The Order of Malta was founded close to the year 1048, in a hospital that was founded by the Order of St. John to care for pilgrims at the Holy Land. Over the course of history, the Order has taken up arms to defend the faith in the island of Malta. During the two world wars, the Order helped treat the wounded in several hospitals throughout Europe.

Today, it operates in more than 120 countries, bringing the love of Christ to those in need. It is the only surviving order surviving order from the Middle Ages that is both religious and sovereign. The Boston Area chapter was established in 1974, and currently has over 250 Knights, Dames and auxiliary members from Massachusetts, Vermont, New Hampshire, Maine and Rhode Island. More information on the Boston area's mission and activities is available at www.maltaboston.org.