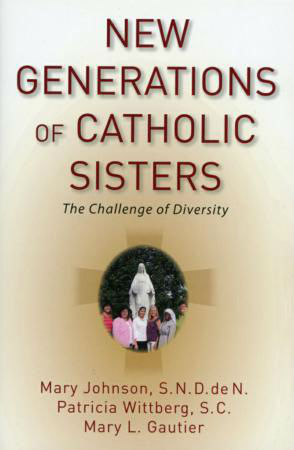 This is the cover of "New Generations of Catholic Sisters: The Challenge of Diversity" by Mary Johnson, SND de N; Patricia Wittberg, SC; and Mary L. Gautier. The book is reviewed by Rachelle Linner. (CNS)

"New Generations of Catholic Sisters" is an important and sober study about a topic that, too frequently, is written about in polemical language.

Well-written and grounded in impeccable scholarship -- the authors are all accomplished social scientists and academics -- the book is, nonetheless, accessible to the general reader. They base their conclusions on findings from two major national studies of religious life. One, in 1999, focused on sisters who had entered religious life between 1965 and 1980. A 2009 study analyzed the responses of women who entered after 1993. (The survey questions are included as an appendix to the book.)

The authors provide important information about the contemporary religious landscape. "How do we distinguish between religious institutes and other ways of life in the church that are becoming more visible in some parts of the country and the world?" These include ecclesial movements, secular institutes, different forms of consecrated life -- including consecrated virgins and hermits -- and associations of apostolic life.

They only briefly discuss recent Vatican investigations of women religious, but note that "tensions between the hierarchy and religious institutes are not new." The authors summarize recent church documents on religious life -- three from the Second Vatican Council, as well as St. Pope John Paul II's 1996 encyclical, "Vita Consecrata" ("Consecrated Life"). These documents, written without any input from religious themselves, provide a much different vision than statements from the first World Congress on Religious Life, held in Rome in 2004.

Within this context, their main focus is the importance, and impact, of generational differences on the future of religious institutes. Sociologists use the concept of generations as "a social location" -- such as one's class, gender and hometown -- "that determines the kind of experiences one will have growing up."

"In a fundamental and basic way, we are the products of the eras in which we grew up," the authors write. This is particularly true for different generations in the church.

The experience of the post-Vatican II generation (born between 1961 and 1981) "was often of an institution in constant and disorienting flux, unable to articulate anything worth believing in." The millennials (born since 1982) "are the least knowledgeable about Catholicism."

In general, the millennial generation is "only tenuously attached to their faith" but its "minority generational subculture" is fiercely devoted to the church and thus most likely to be drawn to religious institutes. These candidates are drawn to orders that wear habits and live in community, tend to spiritualize the challenges of religious life, and use "spousal" and "bride of Christ" imagery to discuss their vocational choice. How communities of different generations deal with this group will determine the future of religious life.

The millennial generation also must contend with structural factors that include declining family support for religious vocations and the burden of educational debt.

"New Generations of Catholic Sisters" is an honest and courageous book. It refuses to hide from the complex challenges facing religious life. "Whatever its cause, the predicted demise of all or most of the religious institutes of women in the United States has ominous implications for American Catholicism, should it come to pass." This important book, written in the service of religious life, deserves a wide and respectful readership.

Linner, a freelance writer and reviewer, has a master's degree in theology from Weston Jesuit School of Theology.