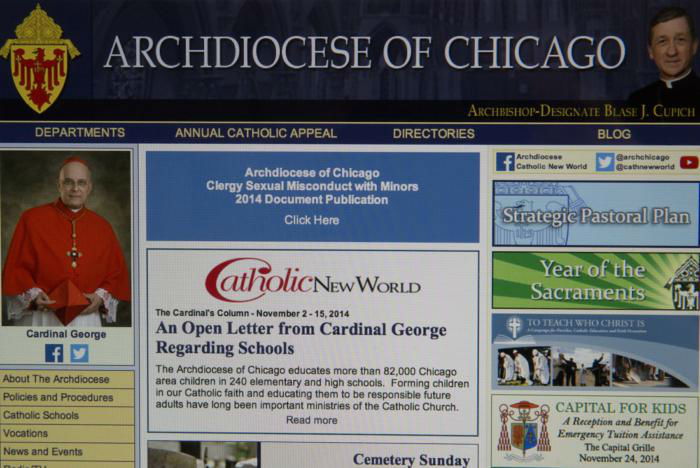 The Archdiocese of Chicago has released documents on past clergy sex abuse cases, shown here on the archdiocesan website Nov. 6. Officials said 92 percent of the cases occurred before 1988. (CNS photo/Chaz Muth)

CHICAGO (CNS) -- The Archdiocese of Chicago Nov. 6 released approximately 15,000 pages of documents related to 36 archdiocesan priests who have substantiated allegations of sexual misconduct with minors.

The documents are posted on the archdiocesan website, www.archchicago.org.

All of the records pertain to incidents that took place years or decades ago, and the names of all of the priests involved have been posted on the website for years. Fourteen of the 36 priests have died; none of them are in ministry in the Archdiocese of Chicago.

John O'Malley, special counsel to the archbishop for misconduct issues, said the documents answer several questions: what the abuse was and when it happened; when the archdiocese learned about it; and what the archdiocese did about it.

The archdiocese released similar records pertaining to 30 other priests in January. The two sets of documents released cover all of the archdiocesan priests with substantiated allegations of sexual misconduct with minors who are identified on the archdiocesan website except for two, who have ongoing civil or canonical legal cases.

"As we said in January, we are committed to transparency with the people we serve," Cardinal Francis E. George said in a statement. "We cannot change the past but we hope we can rebuild trust through honest and open dialogue. Child abuse is a crime and a sin. The Archdiocese of Chicago is concerned first and foremost with bringing healing to abuse victims."

O'Malley said he hopes that people who want to know how the archdiocese has responded to abuse allegations will look to the documents.

"There still remains some unsureness about what has happened in the Archdiocese of Chicago, and some of the advocates continue to say nothing has changed and that the archdiocese's response to this issue has been bad, that it's not enough," O'Malley said. "Let's get the full story out. Our hope is that fair-minded people can look at these documents and see that the archdiocese has worked very hard since 1992 to respond compassionately, responsibly, appropriately and fairly."

The release of documents in January was part of a mediated agreement involving Minnesota-based attorney Jeffrey Anderson. When those documents were released, Cardinal George made a commitment to release the rest of the files as well, although this release was completely voluntary and not required by any court or any agreement with plaintiffs or their attorneys, O'Malley said.

While many other dioceses have released similar documents, it has generally been as part of a court settlement or bankruptcy, he said.

Ninety-two percent of the cases included in the documents released Nov. 6 occurred before 1988, the statement said.

Prior to being released, the archdiocese reviewed the documents and redacted information to protect victim privacy, comply with legal restrictions against publishing mental health and medical information and protect the privacy of third parties mentioned in the documents, but not involved in the abuse.

Nothing was redacted or removed to conceal the identity of abusers, O'Malley said.

"This is the culmination of a process that we started in January, when we released the documents of the first 30 priests," he said. "The process took time to carefully identify what documents should be included."

One difference between the documents released in January and those released in November is that instead of attempting to redact victims' statements to remove all identifying information, the archdiocese included abstracts of their stories to further protect their privacy.

Archdiocesan officials working to prepare the documents learned a lot when they combed through the documents released in January, working in cooperation with plaintiffs' attorneys under the agreement, O'Malley said. Since then, they have learned even more, he said, including that discussion of sexual abuse can be traumatic not only for the victims of sexual abuse who are involved, but for other victims of abuse and even for the general public.

"These types of incidents are traumatic," he said, explaining why the people working with the documents took such care. "We needed it to be right."

The archdiocese's Office for the Protection of Children and Youth saw an increase in the number of people calling to report having been abused years ago after the January document release, said Jan Slattery, the office's director. There were no allegations against priests that had not been previously identified.

"In some cases, they weren't looking for a settlement," she said. "They've gone on and had successful lives. But the release surfaced the abuse, and they wanted some support."

The two men whose documents have not been released are Daniel McCormack and Father Edward Maloney.

McCormack was laicized in 2007 following his arrest on charges of molesting five boys. He pled guilty and was sentenced to five years in prison. He has been detained in a mental health facility since his sentence ended in 2009, and this year he was charged with abusing another boy in 2005. The archdiocese also continues to face lawsuits stemming from his alleged abuse.

Father Maloney was removed from ministry in 2009 and canonical proceedings seeking his laicization are ongoing.

The release came less than two weeks before Cardinal George's successor, Archbishop Blase J. Cupich's installation as the ninth archbishop of Chicago Nov. 18. O'Malley said the timing was intentional on the part of Cardinal George.

"When we learned of the appointment Archbishop Cupich, Cardinal George asked if it was possible for this to be completed on his watch," O'Malley said. "We have great respect for Cardinal George's involvement in this process. Given all that's happened in his life, he has remained committed to this issue and making sure this story is told."

Slattery said she hopes making this information public will be another step towards healing for the victims of clerical sexual abuse and for the whole church.

"This is an opportunity for us to tell the truth," she said. "It's by telling the truth that we move forward."

The Archdiocese of Chicago is in full compliance with the Charter for the Protection of Children and Young People, adopted by the U.S. Bishops in Dallas in June 2002. The charter requires that no priest with even one substantiated allegation of sexual abuse of a minor can serve in public ministry.

The Archdiocese of Chicago refers all reports of sexual abuse immediately to civil authorities. The archdiocese's Independent Review Board examines the findings of all investigations and makes recommendations to the archbishop regarding fitness for ministry and safety of children.

Martin is a staff writer at the Catholic New World, newspaper of the Chicago Archdiocese.