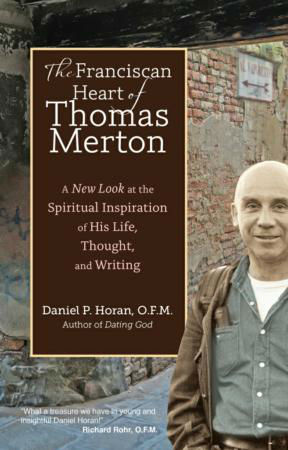 This is the cover of "The Franciscan Heart of Thomas Merton: A New Look at the Spiritual Inspiration of His Life, Thought and Writing" by Daniel P. Horan. The book is reviewed by Brian T. Olszewski. (CNS)

You're probably thinking, "Merton wasn't a Franciscan; he was a Trappist." And you're right.

Franciscan Father Daniel Horan knows that, too, but in this volume he does his best to make certain readers are aware not only of the Franciscan connection to the famed monk, but of the depth and breadth of that connection.

After providing brief biographies of St. Francis of Assisi and Father Thomas Merton, Father Horan delves deeply into the latter's life, beginning with how the famed priest almost became a Franciscan, and what might have prevented that from occurring. That chapter -- "The Rise and Fall of a Vocation" -- is the most engaging in the book as Father Horan details the struggles and the eventual unraveling of a formal connection between Father Merton and the Franciscans.

From there, he takes readers on a Merton journey that weaves spirituality, prayer and culture, quoting from the saint and the monk, referencing material written about each. It is evident that the author is immersed in the Franciscan way and in the words and example of Father Merton by how he is able to parallel the prophetic minds and hearts of the two regarding the poor, peace, environment, nonviolence and outreach to those of other faiths.

While the book often reads like an extended term paper or thesis -- it includes 26 pages of notes -- students of St. Francis and Father Merton will appreciate the work that went into Father Horan's examination of Father Merton's heart through a Franciscan lens. Unfortunately, those lacking familiarity with the two men may struggle as they wend their way through each chapter.

At the very least, a reading of Father Merton's writings, in particular "The Seven Storey Mountain" and "Seeds of Contemplation," would be helpful as Father Horan refers to them throughout. Also helpful for those wishing to get a firmer grasp of the Franciscan connection would be some understanding of the works of St. Bonaventure and Blessed John Duns Scotus.

Although it appears at times that Father Merton is a Catholic figure about whom everything possible has been written, scholars find ways to shed new insight upon his life. Father Horan explores Father Merton's Franciscan link, and provides a valuable resource for those who wish to know as much as they can about him.