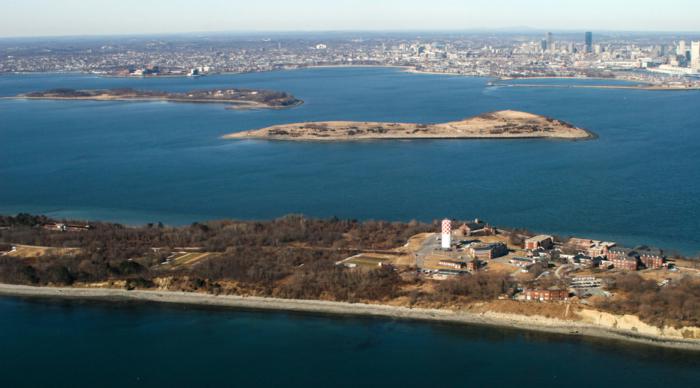 An aerial view of the facilities on Boston Harbor's Long Island, pictured in 2010. Flickr photo CC BY 2.0/ Doc Searls

BOSTON -- More than sixty local religious leaders and homeless service providers gathered on Boston Common, Nov. 25, to pray for those displaced when a bridge closure resulted in the evacuation of a homeless shelter on an island in Boston Harbor.

The group, Religious Leaders for Long Island, gathered at the Brewer Fountain on Boston Common, a regular gathering spot for Boston's chronically homeless.

At the gathering, Executive Director of the Massachusetts Council of Churches Rev. Laura Everett said in the Book of Deuteronomy Moses teaches the Israelites to remember and to give thanks in their prayers of thanksgiving.

"First you remember, and then you give thanks, and we are called here today to remember, because when we gather with loved ones this Thanksgiving it could be easy to forget all who are without adequate, dignified and stable shelter," she said.

Father J. Bryan Hehir, Cabinet Secretary for Health and Social Services, represented the Archdiocese of Boston at the gathering. He read from Matthew 25 during the prayer service.

"Everybody was just trying to lift up these people, so that everybody concerned is focusing as much as they can on them, because the situation is dire with the winter coming," Father Hehir told The Pilot in a later interview.

Leaders from the Roman Catholic Archdiocese of Boston, Jewish Community Relations Council and Islamic Council of New England all read Scripture from their traditions affirming the "holy obligation to care for our neighbors."

According to the Mass. Council of Churches, with the closure of the Long Island facility, other local shelters are over capacity, and the city has lost half the available detox beds. According to a release from council, 220 men are sleeping on cots on a basketball court with only 2 bathrooms and displaced women are sleeping in the woods.

"It's important to the archdiocese because we are supposed to feed the hungry, clothe the naked, and shelter the homeless -- and we have got 700 homeless that need help," Father Hehir said.

He applauded recent efforts by Mayor Martin J. Walsh to address the situation. According to the City of Boston's website, restoration of the bridge could cost $9 million -- funding has been allocated, with half provided by the City of Boston and half from Mass. Department of Transportation -- in a process to be completed in an estimated 24 to 36 months.

The Boston Public Health Commission is working with its provider network to find shelter from the cold weather at facilities throughout the city, including at the Pine Street Inn and St. Francis House.

Father Hehir said the Archdiocese of Boston expects to contribute to public and private initiatives in the ongoing effort to address the arising needs related to the situation.

"We stand ready to do what we can through our agencies," he said.