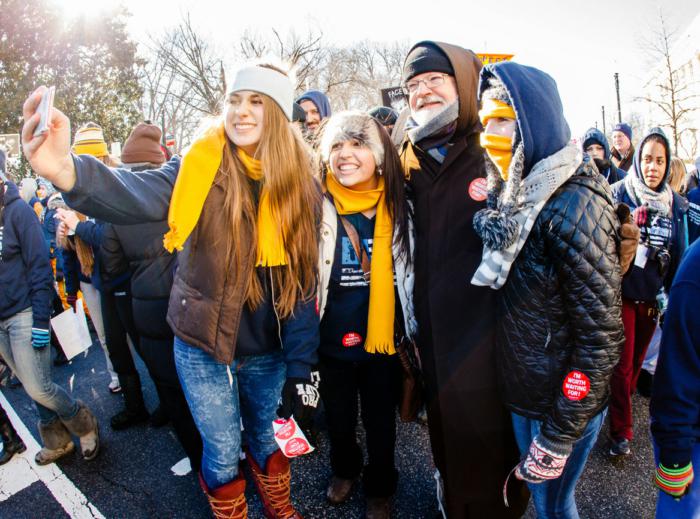 Cardinal O'Malley poses for a 'selfie' photograph with pilgrims from Boston at the 2014 March for Life. Pilot file photo/Gregory L. Tracy

Father Matt Williams, director of the Office for Lifelong Faith Formation and Parish Support's Faith Formation of Youth and Young Adult Ministry, said Cardinal Seán P. O'Malley puts a strong emphasis on the importance of participation of the Archdiocese of Boston at the March for Life -- particularly for young people.

"Cardinal Seán has made it a priority in his own personal life as a priest, and then as a bishop, to attend the march every year. He has never missed one, and he has made it one of his priorities in the Archdiocese of Boston to make sure that every young person -- middle school, high school, young adult -- is invited to join him and accompany him to this march," Father Williams said.

"The reason is because not only does it draw our young people into the awareness and understanding of the dignity of life and to be a voice for those who do not have a voice, it also becomes an opportunity for our young people to encounter the Church alive in its young -- to see the Church as really vibrant, to see that the Church is so much bigger than our little community here or there in the parish or in a school, but to see literally hundreds of thousands of young people from across the country," he said.

Organizers call groups attending the March for Life "tracks" on pilgrimage. The tracks include a track for young adults, a track for middle school age young people, a high school student track, and a family track.

This year, the Faith Formation of Youth and Young Adults Ministry has added the additional option for young adults, which Father Williams said will emphasize the pilgrimage aspect of the trip, as well as offer more affordable travel. Those who join the young adult track can choose to stay at more simple accommodations, sleeping on the floor of a church in Washington.

Father Williams also said that the Sectretariat for the New Evangelization under Bishop Arthur Kennedy has made the March for Life a high priority, following a realignment of Central Ministries at the Pastoral Center early in 2014 which has built collaboration between his and other ministries.

Janet Benestad, cabinet secretary for the secretariat, said she hopes that increased collaboration between Faith Formation of Youth and Young Adults Ministry and other ministries and apostolates in the archdiocese reflects that the new structure of Central Ministries is working to advance a crucial initiative. She said the effort to defend life has had an evangelizing effect with tangible changes for society and individuals.

"We see amazing transformations in the young people and the families who go to the march. Just experiencing what's happening there -- whether it's the speeches that are given, or the crowds that are gathered, or the various evangelization that's done, whether on the bus or when we get there, the Mass, spending some time with Cardinal Seán -- that whole encounter is transformative," she said.

"It's very important for more and more people to go," she said.

But even as in-person participation in the march has grown, so has participation through social media, due in part to new initiatives from march organizers.

The national group March for Life Education and Defense Fund launched an app for the March for Life in 2014, and those marching tweeted under the hashtag #WhyWeMarch.

Social media following may also have received a boost last year thanks to a winter storm that hit the East Coast just before the march.

When a bus heading to last year's march from Boston was forced to turn back because of bad weather, some onboard, including Michael Drahos, now coordinator of Faith Formation for Youth and Young Adults Ministry, resorted to following the march on social media.

"Our bus got cancelled last year, so I wasn't able to go. I think it was a lot easier for me to follow people linking to the hashtag with videos, and I think there was a much broader social media presence last year," Drahos said.

This year, the social media presence will continue, allowing those back in the archdiocese to follow March for Life events online at PilotCatholicNews.com, BostonCatholicPhotos.com and CatholicTV.com. Pilgrims can tag their social media updates to the Archdiocese of Boston's Facebook, Twitter and Instagram accounts. 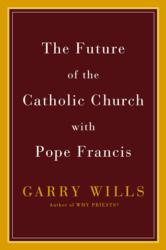