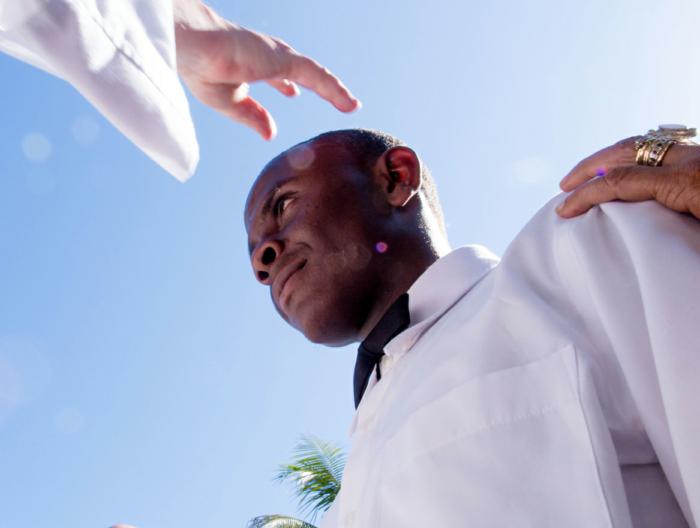 Esmane, one of the oldest residents at Zanmi Beni (Haitian Creole for "Blessed Friends"), a home for 64 children abandoned or orphaned during the 2010 Haitian earthquake, receives the sacrament of baptism Dec. 21. CNS photo/Donis Tracy

Vatican conference to show Haiti 'not forgotten' after quake

CROIX-DES-BOUQUETS, Haiti (CNS) -- Young Patrick and Mika have seen more than their share of suffering.

Found unclothed, nonverbal, and malnourished roaming in a cemetery in 2010, Patrick was taken to the General Hospital of Port-au-Prince, where he was nursed to good health. But, despite the care and because of the pervasive influence of the practice of voodoo, Patrick was chained to a radiator every night out of fear he would jump out of a window.

Mika was abandoned at birth. Only days old when dropped off in an empty shoe box, she was blind, dehydrated and malnourished and would not have lived much longer had she not received the proper care.

Today, Patrick is a happy young man about 16 years old. He cannot speak because he is deaf and has cerebral palsy, but his personality is evident in his smile. After a few weeks of nourishment, Mika's vision returned, and today she is a healthy, outgoing 5-year-old schoolgirl.

Patrick and Mika are two of the children who are part of the Zanmi Beni family, a program based in this town near the Haitian capital of Port-au-Prince. In Creole, Zanmi Beni means "blessed friend."

On Dec. 21, Patrick and Mika became members of another family -- the family of faith -- as the 64 residents of Zanmi Beni were baptized in an outdoor ceremony on the program's grounds.

Helping the children prepare for baptism was not easy, explained Jennie Block, a Zanmi Beni co-founder. Before they could be baptized each child needed a birth certificate. Co-director Loune Viaud officially adopted each child, applying for a birth certificate by approximating their age and assigning a birth date. For their surname, they were all named "Beni."

"There was no record of these children at all," said Dominican Father Mark Wedig, a Zanmi Beni supporter and professor of theology at Barry University in Miami Shores, Florida. "Without birth certificates, these children didn't exist. So the Church named them and claimed them."

The children, wearing white baptismal dresses or suits and dress shoes donated by Joe and Irene Souto of Miami, were excited as they sat with nearly 150 Haitian and American guests gathered to witness the ceremony.

"These children will have another place to call home for they are about to be incorporated into the body of Christ as members of the Christian community," Block told the assembly.

"The fact that over 75 people would put their busy lives on hold, four days before Christmas, to travel to Haiti from all over the United States to witness the baptisms of these beautiful children couldn't be a better example of God's household in action," she said.

Each child was called by name, and one of the eight priests and a deacon officiating made the sign of the cross on them. Their godparents were invited to do the same.

The story of each child at Zanmi Beni is different; yet all are alike. Some have been orphaned; some were abandoned; some are severely disabled; some have required major medical procedures. But all have experienced loss, and all have found a home in Zanmi Beni.

The residence was founded in the aftermath of the Jan. 12, 2010, earthquake that ravaged much of Haiti. It is a partnership between Partners in Health, a Boston-based health care organization and Operation Blessing International, a Christian organization addressing human suffering in the United States and around the world.

Zanmi Beni strives to help each child live a full life in a safe, secure environment surrounded by love and acceptance.

"Every child has a plan," Viaud explained, saying that each child receives what he or she needs: those who are able attend area schools; those who require physical therapy or medical care receive it. "But more importantly, all are given love," she said.

In his reflection, Father Presmanes said the Zanmi Beni children "have found the loving embrace of Jesus in this place. They have been loved and cared for and embraced with extraordinary love and compassion by people who, in the 'here and now,' do what Jesus did in the 'there and then.'"

After the ceremony, Paul Farmer, co-founder of Partners in Health, reminded the group that "none of us will forget today, nor will we forget the friendships and relationships that we have deepened today."

He called on those in attendance to "form a web" of friendship in order to be "bound up together in protection."