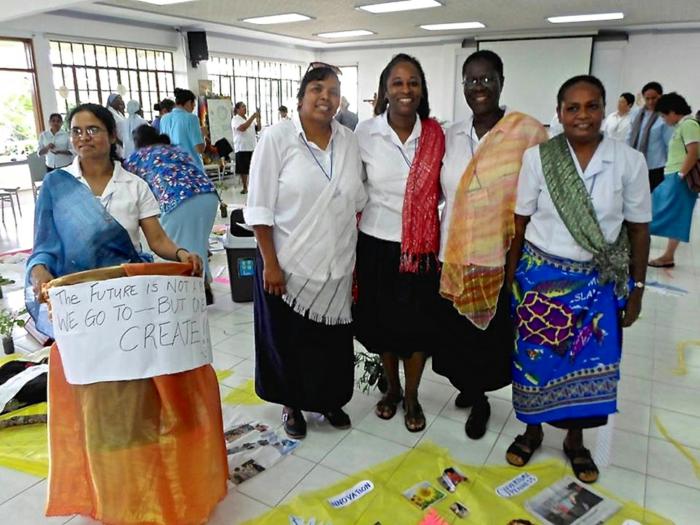 After studying the difficulties and the signs of hope in the world today, some Sisters gave a presentation representing the different continents. Sister Shakuntla Devi Arjun, from Fiji, has served in Bangladesh and is now on the novitiate staff in New Zealand; Sister Anne Suman, from Fiji, now serves in Rwanda; Sister Michelle De Silva, from Trinidad, is now in Colombia; Sister Nicole Gomis, from Senegal, served in Peru and Colombia, before returning to Africa; Sister Janet Ninipua, from the Solomon Islands, is in Bangladesh. The quote on the lectern is "The future is not a place we go to, but one we create" (Margaret Silf). Courtesy photo

Members of all religious congregations are people who are consecrated to God through a life of prayer and service. Since the Second Vatican Council we are also more aware that every Christian is called to participate in the mission of Christ. What, then, is the distinctive characteristic of a "missionary" congregation?

When a woman enters the Marist Missionary Sisters, there is the specific desire, and expectation, that she will be asked to minister in a country not her own.

"In complete availability, we are ready to leave our own country, to set out or set out again towards other peoples and other cultures, knowing that the Spirit precedes us -- He whose gentle action is the source of evangelization..." (SMSM Constitutions, #16)

Evangelization is our core mission. And yet we know that this word itself is problematic to many people today. For some it conjures up images of the preacher who insists that all those who refuse to be baptized will go to hell, (which is not a Catholic teaching.) Others say that missionary work was the "spiritual arm of colonialism" and is now obsolete.

Living and spreading the Good News of Jesus Christ is never obsolete. Neither can it be imposed by threats or force. The way of being a missionary is by "following the same road walked by Jesus Christ, who, through love, became poor and obedient even to the gift of His life on the cross." (SMSM Constitutions, # 13)

I believe that the fact that so many of our "younger" Sisters are from countries that are neither rich nor powerful is part of the design of God that the Word will be spread throughout the world at the "grassroots," as it was in the earliest days of the Christian community. This is also in harmony with our Marist spirituality, as we find our inspiration in contemplating "Mary at Nazareth", and "Mary in the newborn Church" where she was "the soul of the apostolate" while remaining in the background." (SMSM Constitutions #53)

Recently Sister Georgeanne Marie, our congregational leader in Rome, called together those of our Sisters who had already made perpetual vows and were 50 years old or less. About 50 arrived in the Philippines for what was called the "Tagaytay Event," named for the place outside Manila where it was held. It was a truly international and intercultural gathering, where the Sisters did intensive work on examining our history, contemplating our world today and looking to the future of our participation in the mission of the Church throughout the world. They have now returned to their mission areas with a renewed energy for mission.

If you feel attracted to this way of life, spend time in prayer, seeking to know what God is asking of you; speak with a Sister or someone who knows you well, take a look at our website www.maristmissionarysmsm.org, and please feel free to contact our Vocation Director, Sister Palepa Ioane, by email: vocations@maristsmsm.org or phone: 781-996-9233, or write to her at Marist Missionary Sisters, Regional Office, 349 Grove Street, Waltham, MA 02453.