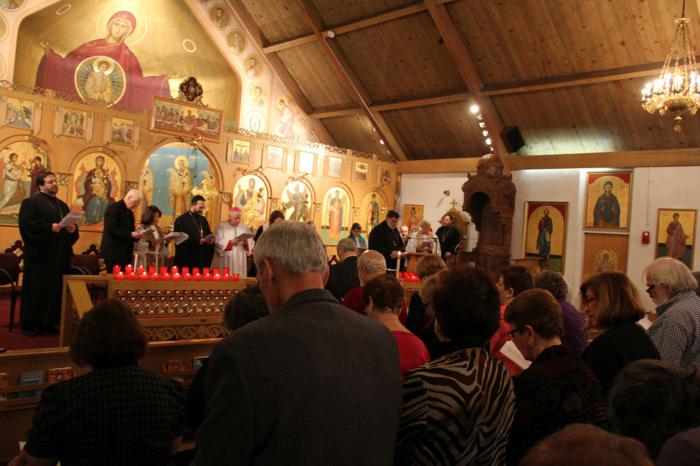 WOBURN -- Almost 200 supporters of Christian unity lifted their voices in scripture readings, songs and prayer in celebration of the Week of Prayer for Christian Unity at Annunciation of the Virgin Mary Greek Orthodox Church, Jan. 18.

"I stand before you on behalf of his eminence Metropolitan Methodios, the metropolitan archbishop of the Greek Orthodox Church here in New England, and I bring to you his greetings, his blessings, and his love, and his thanks for you, the faithful people of the ecumenical faith community here in Woburn and beyond, for your presence today. How good it is to be together in prayer as one. This is the day that the Lord has made. Let us rejoice and be glad of it," said Father Theodore J. Barbas, chancellor of the Greek Orthodox Metropolis of Boston.

Rev. Nary Bettencourt, pastor of the First Baptist Church in Woburn, proclaimed the Gospel of John 4:1-42, where Jesus meets the Samaritan woman at the well. The Pontifical Council for Promoting Christian Unity and The Commission on Faith and Order of the World Council of Churches chose the passage and theme for the week "Give me to drink," from the story of the Samaritan woman, because the story recognizes the need for each other in the continued mission of the Christian church.

The two groups had invited the National Council of Christian Churches of Brazil (CONIC) to prepare the resources for prayer services for the week, and the service in Woburn followed many of the recommendations. In a procession at the beginning, representatives of some of the faith communities poured water into an urn before the altar, to represent the well in the story as a symbol of unity.

Bishop Kennedy centered his homily on the Gospel reading.

"It is also an invitation to us, the invitation of our meeting with Jesus. We do this not only individually but together, and it is we hope a way for coming to reinvigorate the ecumenical pilgrimage that shapes our present and our future," he said.

He also spoke about the story in the context of ecumenical relations in current times.

Father Clapsis lead the gathered in reciting the Nicene Creed.

A collection taken up at the prayer service benefited the Dwelling Place, a soup kitchen sponsored by local churches including St. Thomas and St. Dorothy Catholic churches in Wilmington. Rev. Yoo-Yun Cho-Chang, of the United Methodist Church of Woburn, gave remarks on the Dwelling Place, which began with the support of churches in Woburn in 1987 before it gained support from churches in other communities over the years.

"We talk about unity, and we talk about serving those in need. The Dwelling Place is just that. It reflects the core spirit of unity," she said.

After song and praise, Rev. Everett thanked those in attendance before Bishop Kennedy gave the benediction.

"Sometimes when we hear that prayer from John that His Church might be one, we stop reading any further. We hear Jesus pray that they may all be one, and we forget the verse that follows. We forget Jesus prays that His followers might be one, so that the world might believe. So that the world might believe, and so, it's not just for our own good that we are one, but for the sake of the world," she said.

Father Clapsis, pastor at Annunciation of the Virgin Mary, has represented the ecumenical patriarchate in international ecumenical efforts and teaches theology at the Holy Cross Greek Orthodox School of Theology in Brookline. After the service, he told The Pilot why he finds ecumenical outreach important.

"I am a restless theologian. I am not a realist. I expect the impossible, and I think praying and working for the unity of God's Church is not a burden or an extracurricular activity for a priest or for a theologian, but it signifies that we desire the catholicity of the Christian Church, and we desire that all the disciples of Christ will be united in his name by the creation of the Holy Spirit," he said.