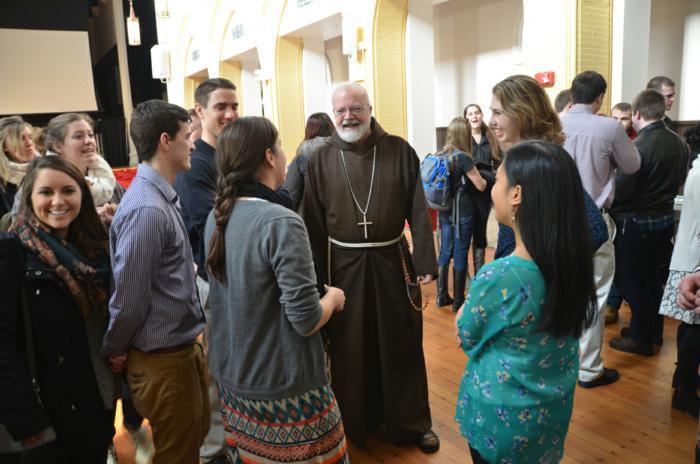 'By Sunday (1/25) I was back in Boston and so I went to Northeastern University for a Mass and reception with the students.' Pilot photo/CardinalSeansBlog.org

Following the March for Life last week, I stayed in Washington for a couple of days to attend the Cardinal O'Connor Conference on Life at Georgetown University on Saturday. Conference on Life is an all-day event sponsored by three groups on campus: the pro-life group, the Catholic Daughters of the Americas and their Knights of Columbus chapter. I was asked to give the keynote address in Gaston Hall. There were several hundred people in attendance, including many students. While in Washington, I went with the Friars to visit the Missionaries of Charity at their house called the Gift of Peace, where they take care of AIDS patients, homeless and mentally ill persons. A number of our Capuchin brothers work there as volunteers. They have about 50 residents there, as well as a house of formation for the sisters. There are over 30 sisters at the house. A couple of the sisters had worked in Boston and New Bedford so I knew them from their time in Massachusetts.

By Sunday (1/25) I was back in Boston and so I went to Northeastern University for a Mass and reception with the students. Brother Sam and the Brotherhood of Hope are doing an excellent job there and we are so grateful for all they do.

From there I went to Faneuil Hall to attend Massachusetts Citizens for Life's annual Assembly for Life. The keynote speaker for the day was Anthony Esolen. In my remarks, I spoke a little bit about the events at the March for Life and how over 1,000 people from Massachusetts went down to be with us at the March. I thanked them for all their support for the cause of life.

Sunday evening I celebrated the Mass for benefactors at St. John's Seminary. During the evening they honored Secretary of State Bill Galvin to the Archbishop John J. Williams Award. We also presented Jim and Pattie Brett with the Saint John the Evangelist Award. As some of you may know, the rector of St. John's Seminary, Msgr. James Moroney, has his own blog and he has a very nice post on the event.

From there I went to St. Patrick's in Stoneham for their ecumenical service to celebrate the third anniversary of the establishment in the U.S. of the Personal Ordinariate of the Chair of St. Peter, which was established by Pope Benedict for those who wished to enter full communion with Rome but maintain their Anglican traditions. There were a number of different ministers from local churches present for the celebration. Father Jurgen Liias organized it with his parishioners from St. Gregory the Great Church, which is the ordinariate community in the diocese.

Thursday (1/26), we traveled to Vermont for the installation of Bishop Christopher Coyne as the new Bishop of Burlington. We are very happy to have Bishop Coyne back in New England. In addition to their being many, many priests from the diocese of Burlington, there were also quite a number from Boston and Indianapolis. ...Bishop Coyne gave a beautiful homily and seemed very happy. In my remarks I was able to thank Bishop Matano for all is fine work during his tenure in Vermont and express our support and best wishes for Bishop Coyne as he begins is new ministry there.