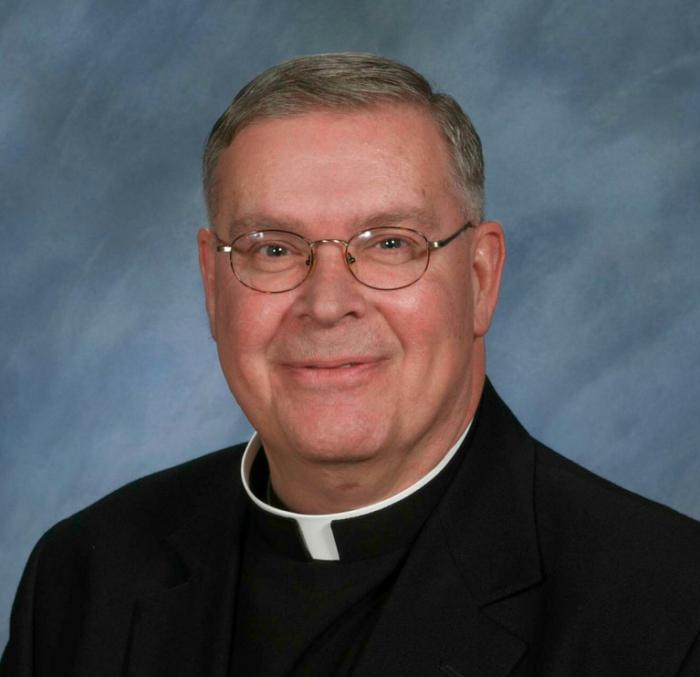 Cardinal Seán P. O'Malley was the principal celebrant of the Funeral Mass of Msgr. Richard J. Mehm at Immaculate Conception Church in Malden. Msgr. Mehm had been pastor of the Malden parish since his appointment to the parish by Cardinal Bernard Law on Jan. 1, 2001. He died at the parish rectory on Jan. 27, 2015.

A native of Lynn, where he was born on Sept. 4, 1948, he was the youngest of the four children of the late Joseph and Elizabeth (Hughes) Mehm. He was educated at St. Joseph School, Lynn, Lynn English High School and Salem State College (now University).

He entered St. John's Seminary, Brighton in 1971 as a member of the Class of 1977. Always possessed of a flair for entertainment he was an immediate hit with fellow students and faculty. Broadway productions had nothing on anything in which Dick appeared with fellow stars, he usually being the lead! His fine voice made him a key member of the Seminary choir and he was delighted that he was a featured solo on the seminary's Christmas recording.

He continued his singing career following ordination when he joined up with the "Singing Priest" of the archdiocese, much sought after for their fine shows and often generously serving as stars in parish fundraiser.

Humberto Cardinal Medeiros ordained him to the priesthood at Holy Cross cathedral and assigned as an associate at St. Rita Parish in Haverhill; he and the pastor Father James Radochia were a fine team -- he always said "Raggsy taught me a lot about prayers."

His second assignment was as an associate at Our Lady of the Assumption, Lynnfield. His successor there, Father Kevin O'Leary, rector of Holy Cross Cathedral said "The people always told me 'this place was so much fun when Father Mehm was here with Father McAuliffe.'"

From 1987 to 1990 he was parochial vicar at St. James the Apostle, Arlington. Back to the north shore, he was from 1990-1994 parochial vicar at St. Mary Star of the Sea, Beverly. The busy parish was delighted to have him there because of his kindness, his pleasant demeanor and his great voice -- brought to use both liturgically and on stage in parish events.

In 1994 he was named pastor of St. Andrew the Apostle Parish in Boston's Forest Hills section. During his seven years there he worked with fellow priests and staff to keep the parish and its school alive; the dramatic demographic shifts affecting the Catholic population of the area lead to the closure of the parish and his appointment to Malden.

At Malden he was faced with more challenges, but none he could not or would not face and manage. The once huge parish was simple a very large parish. Previous pastors had taken care of the physical plant and the parish was in safe fiscal condition; so Father Mehm set about reviving participation.

One of his greatest success and one of which he was genuinely proud was the Generations of Faith formation program which reaches across the ages and grades and invites lifelong formation beginning with the family.

Father Mehm was also involved in other activities with his busy parish schedule: a longtime supporter and active member of the Knights of Columbus, he served as chaplain in several councils and as associate state chaplain for Massachusetts. He was also named a Knight of the Holy Sepulchre in 2004 and this past October was promoted to Knight Commander.

He served as chaplain if the Lynn Police Department and was vicar forane of Vicariate IV of the North Region from 2002-2008, serving both Cardinals Law and O'Malley.

He was especially proud of his "ecclesiastical lineage" -- his uncle Msgr. Walter J. Mehm was a priest of the Lansing diocese and Dick told both Cardinal Law and Cardinal O'Malley that "being a Msgr. is in my genes." Apparently that message got to Pope Francis and on Jan. 23, 2015, the Holy Father named Father Mehm a Chaplain of His Holiness with the title of Rev. Msgr.

Cardinal O'Malley visited him the day before his death to tell him of the Holy Father's decision; he was even in the finals days of his life, delighted that the he was proven right about his ecclesiastical genes!

Msgr. Mehm's Funeral was celebrated at Immaculate Conception Church in Malden. With Cardinal O'Malley as the principal celebrant there were many brother priests from the archdiocese and beyond, several classmates from other dioceses and friends from religious orders as well.

Among those who indicated they would be concelebrating were, Merrimack Regional Bishop Robert Hennessey; Immaculate Conception's administrator, Father Albert Capone; Fathers James Canniff, Richard Bakker, SMA, and Glenn Byrne, all in residence at the Malden parish; Father Charles Connolly, SJ, Loyola House, Boston; and Father Kevin Toomey, a longtime friend of Msgr. Mehm, who also served as the homilist.