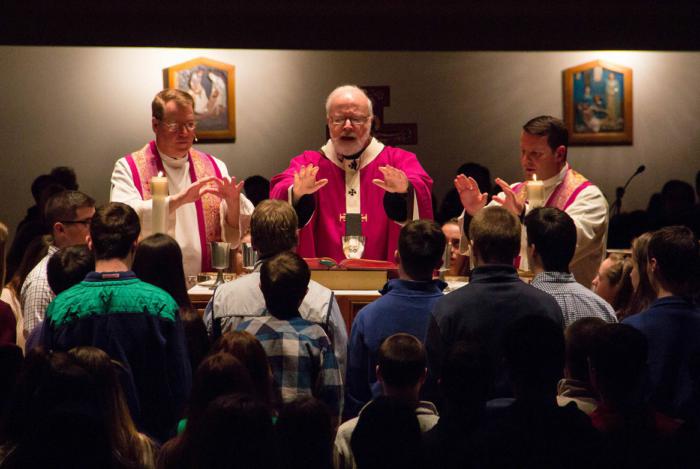 Through the Appeal each year, Catholics help support 50 ministries in the archdiocese. The ministries sustained by the Appeal serve 289 parishes, 122 Catholic elementary and secondary schools, and thousands of Catholics of all ages in many life circumstances.

The Appeal launches in all 289 parishes throughout the archdiocese March 7 and 8. Cardinal O'Malley will celebrate the 4 p.m. Mass on March 7 at St. Anthony of Padua Parish in Shirley and the 12 p.m. Mass on March 8 at St. Patrick Parish in Stoneham. In other parishes, the celebrant, an Appeal coordinator, or another volunteer will explain the impact of the Appeal in the parish and introduce the in-pew campaign at each Mass.

According to the archdiocese, it is experiencing a "period of unprecedented success," after the 2014 Catholic Appeal raised $15.3M in pledges. Nearly 50,000 families supported the Appeal that year -- an increase of 22 percent from the year before.

In his homily, the cardinal spoke about the experience of the apostles when the Lord revealed himself to them in the Transfiguration. He related it to the importance of being strengthened in faith for Christians as they face difficulties in life.

"The mountaintop experience is a very important event in our lives, to allow us to be strengthened in our faith so that when we go down the mountain and have to confront the Cross and the difficulties that we will have the strength to do so, because in our hearts we will carry with us the vision that we had on the mountaintop," he said.

"This is our table. This is where we come and make sacrifice to God, where we are truly and most visibly God's people. So during this Holy Season of Lent, let us climb the mountain, let us go into the desert, let's look for the time and the space to be with God so that that vision, that faith -- that was nurtured by Abraham, by all of our ancestors in the saints, and by the martyrs whose relics are placed in our altars -- that we too can be messengers of God's joy, nurtured by that faith, nurtured by the witness of our brothers and sisters gathered around this altar," he said.

During the liturgy of the Eucharist teens gathered around the cardinal at the altar.

Life Teen Hanover was established in 2004 at St. Mary of the Sacred Heart Parish by pastor Father Chris Hickey. In June 2014, St. Mary's in Hanover and St. Helen's in Norwell came together to form the Holy Mothers Collaborative.

"The kids feel very honored to have the cardinal to inaugurate the two parishes' new youth program, which is Life Teen SMASH," Father Hickey told The Pilot after Mass.

"SMASH is St. Mary's and St. Helen's. The kids named it, and we asked if the cardinal would he come down and give us his blessing to begin this new endeavor, not just the collaborative of the two parishes, but also in a more specific way the Life Teen program of the two parishes," he said.

Stephen Oxmer, a high school sophomore, said he loves the program, which he said really inspires him.

"It's like a family. It's like a community. Everyone is accepting of everybody else. You don't feel unwelcome. You walk in, people hug you. Everybody knows your name. They just really welcome you," he said.

Mike Habeeb, who now runs the program as the youth minister, got involved with the program as a junior in high school when Father Hickey first came to the parish.

"It's changed my life, and you see the way tonight it changes these kids. It makes Church attractive to a group of kids who might not otherwise be as attracted to the Church," he said.

In 1985 the Life Teen program launched a parish-based youth ministry in Mesa, Ariz. and developed into a program that now reaches 31 countries and 1,646 parishes.

For one altar server the night was about the Mass itself, which brought his first opportunity to serve alongside Cardinal O'Malley.

Jacob Merzon said serving alongside the cardinal at the Mass made him feel energetic.

"You just feel good for doing it," he said.