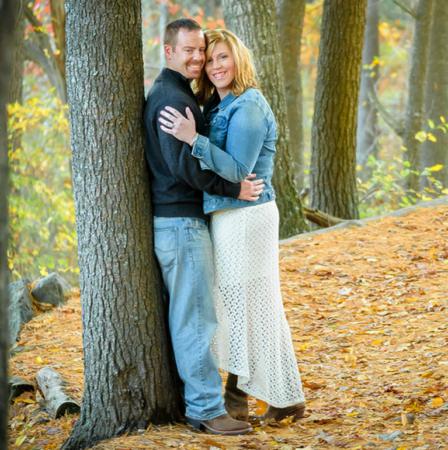 Colleen Kelley said her experiences at St. Mary Parish in Randolph helped her grieve the loss of her brother who died. She became Catholic in 2012 and is pictured with her fiance, Patrick Dugan. Pilot photo/courtesy Colleen Kelley

After Colleen Kelley's brother, Michael, was killed by an enemy rocket attack during his deployment to Afghanistan in 2005, she stopped going to church. Kelley, who was 20 at the time, felt angry and distanced herself from her Lutheran faith.

"I was so young, I didn't know what to do. I pushed everything and everybody away," she said.

She remembers struggling with the question, "Why would God do something like this?" and not finding a satisfactory answer.

"I just felt so empty," she said. "Something was missing."

Several years later, she met and began dating Patrick Dugan, who was Catholic.

In high school, she had attended Mass with Catholic friends, so when she heard that Dugan was going to Mass, she asked if she could come along. The service brought back fond memories. "I felt safe there, comfortable, like I belonged."

She remembers thinking, "This is the piece that's always been missing."

She started attending Mass at St. Mary Parish in Randolph regularly, and began speaking with then-pastor Father Ronald Coyne. She told him about the death of her brother, and the priest told her it was okay that she had questions about how God could allow her brother to die. She learned to talk about and accept the feelings she had about the loss.

"His support opened my eyes to allow the healing process with my brother to begin," she said. "It was part of a healing process I hadn't done yet. I didn't get the opportunity to grieve."

Kelley soon joined the Rite of Christian Initiation of Adults (RCIA). She called the RCIA process "eye-opening." As an adult, she felt better equipped to understand the faith, and she could have in-depth conversations about God.

She received the sacraments of first Communion and confirmation at the Easter Vigil in 2012. Dugan was her confirmation sponsor. Both her family and his attended the Easter Vigil. Kelley said she could feel their support during the service, knowing that there were many people at the parish who watched her go through RCIA who she could turn to for support and guidance.

She said the experience of receiving the sacraments was "overwhelming but incredible."

Kelley now serves as a eucharistic minister and member of the parish's cemetery council. And on Oct. 10, she and Dugan plan to get married at St. Mary's. When they got engaged last June, one of their first phone calls was to Father Coyne. She said he played such a pivotal role in her faith journey that they wanted him to celebrate their wedding Mass.

"It's easy to bring questions to him, and you get great input," she said. "I can't speak highly enough of him. He's just an incredible person."

Kelley said she has seen her faith strengthen since she came into full communion with the Church. She feels whole. She also recognizes that growing in the faith does not end at first Communion and confirmation. Instead, it is a "life-long journey."

"I continue learning each week," she said. "It's a growing process."