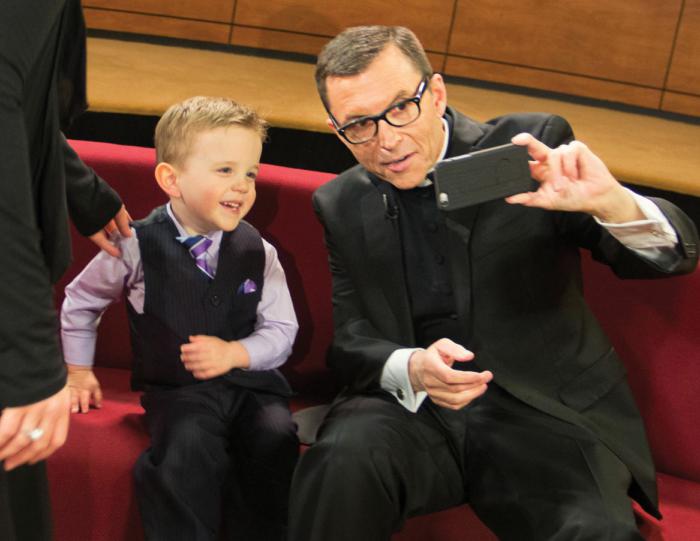 For most children, play time often consists of conjuring up supernatural worlds out of their mundane and routine environments. Whether it is traveling to outer-space in a spaceship made out of couch cushions or putting on a cape and playing their favorite superhero, children are constantly stimulating their minds through role-play.

For one special 3-year-old boy, Kyle Meisner, his role-play is a little different. He prefers to set up candles, find a chalice and ask his parents to hold up the Bible as they "play church." Much like children are obsessed with their favorite sport or video game, Kyle is completely consumed by his love for Jesus. What makes this activity truly unique is not the difference in interests, but the fact that Kyle continues his devout love for Jesus, even as he lives with moderate to severe autism.

Shortly after Kyle's diagnosis, his parents decided to rid their house of TVs and other electronic toys in hopes of getting Kyle to interact with the environment around him. After this change, they noticed their son had taken great interest in religious artifacts around the house.

Kyle's mother, Katey Meisner says that he started "to kiss the Bible, crucifixes, and any religious photos" that he saw. He would even sneak out of his room in the middle of the night to read the Bible and started to eat his meals with a crucifix in one hand.

His mother recounts a story of Kyle trying to leave a relative's home after a few minutes of being there. When he was asked why he was leaving, his response was, "No Jesus."

Kyle's special relationship with Jesus has become such a part of his life that he prefers not to be in environments that do not contain some sort of Christian artifact or presence of Jesus.

One day, Katey Meisner decided to put on CatholicTV's daily Mass for Kyle as a quick distraction while his sister took a nap. He was instantly taken by the Mass and every day since has requested to watch CatholicTV and Father Robert Reed, the president and face of CatholicTV. Kyle's interest in CatholicTV and Jesus are what lead to his first words, "Mama," "Dada" and "Ejus" -- Kyle's pronunciation of "Jesus." It has also helped him develop the overall ability to speak, which can be a hard task for children with autism.

"I found CatholicTV, and he was just instantly taken with it. So, then every day after he would just say 'Ejus' and I would know he would want to watch a Mass," Katey Meisner said.

After some time of putting on the daily Mass for Kyle and watching him bless every person that walked into his home, Katey Meisner developed a nagging desire to take Kyle to the CatholicTV studios.

She hoped to take him before a grueling therapeutic schedule that they have planned for late March but was unsure her family could come up with the financial means due to his costly therapy. Within 14 days of setting up an account on the website "Go Fund Me," Katey Meisner raised over $1,800 dollars from friends, family and even strangers.

"We need every penny we can get for Kyle's therapy, so I started a Go Fund Me page and I put it on Facebook, where all my friends are, and family. It was really overwhelming how many people donated -- and people I didn't even know," she said.

On March 10, Kyle along with his mother and grandmother, Mary Theisen finally made their visit to CatholicTV.

Kyle and his family were present for the filming of the daily Mass with Father Reed followed by a studio tour. Kyle and his mother also appeared alongside Father Reed and his cohost Jay Fadden on the CatholicTV show "This is the Day."

During his visit, Kyle repeatedly said "Father Reed" and "Jesus Christ" as he attempted to communicate his joy at the experience.

"He needed to be here. It was special for him. Most kids want to go to Disney Land, or a waterpark, but this is Kyle's Disney Land. I was so happy to see him be able to verbalize it," Katey Meisner said.

Father Reed said the story of this family trip all the way from Michigan shows the broadening reach of CatholicTV and the interest it sparks in people.

"More and more, we're seeing interest here in the New England area, in the Archdiocese of Boston, and throughout the country from younger people and families. It's very encouraging for me. This is one example of the power of television, the power of CatholicTV, to support families, and to continue to evangelize particularly among young people," Father Reed told The Pilot.