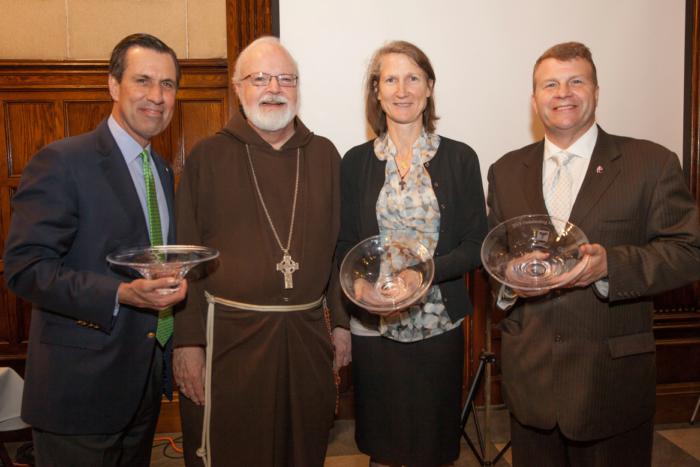 BRIGHTON -- Faculty, staff, students, and alumni celebrated 15 years of the Master of Arts in Ministry Program and honored some of their own, March 21 at St. John's Seminary in Brighton.

Aldona Lingertat, director of the MAM program, which was developed in the late 1990s and launched in 2000 to promote lay ministry and evangelization at parishes, presented alumni awards to three recipients. The honors highlighted the work MAM graduates have gone on to do after they graduated from the program.

"We picked them from the beginning, from the middle and from the more recent classes so that it would represent our graduates over the years," Lingertat said.

The evening's honorees were James Fadden, a 2002 graduate and currently general manager of CatholicTV; Sister Janet Ryan, OSF, a 2005 graduate who went on to become the founding director of the St. Louis community of L'Arche -- a community for people with and without intellectual disabilities; and Craig Gibson, a 2009 graduate, member of the board of trustees at St. John's Seminary, and coordinator of Catholic pastoral services at Lawrence General Hospital. All received an engraved crystal bowl as a tribute for their work.

In remarks after receiving the honor, Sister Janet said the education, coupled with an atmosphere of happiness and laughter, from professors like Father Paul E. Ritt and the student body, created a beautiful backdrop to learn about the faith.

"I was so blessed and touched by the spirit in the program, and that is in people's hearts, not so much in the walls of the building. I really think that speaks to the community that was developed here," she said.

The community continued to develop and in 2011 the Theological Institute for the New Evangelization was established and became the home of the MAM program.

Father O'Connor acknowledged Lingertat, and credited much of the success of the institute to her.

"Aldona is the institutional memory. She is a close friend, a confidant, and someone that I have enjoyed working with. She is really a gift. She radiates Christ in her love for our student body, in her love for seminarians, and her love for the Church," Father O'Connor said.