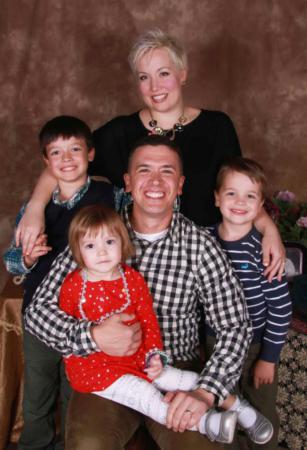 Charles and Olivia Gray's journey to the Catholic Church started with great conversations shared with friends, family and each other.

Charles, a U.S. Army officer, and Olivia met at a base chapel in Missouri in 2002. She, home from Ozark Christian College for the weekend, noticed him right away.

"I saw this really cute guy walk in," she said.

But it was his actions that really stood out to her. Charles offered to help clean up after the service. He was friendly and had a "great attitude."

Charles was attracted to the pretty girl who sang in the church choir. They started dating in December of that year. Charles proposed before he left on his first tour in Iraq, and they were married when he returned in 2004.

As a military family, they moved often and belonged to many different Protestant communities, never in the same denomination twice.

Olivia said that even though they had many positive experiences at a variety of churches, she felt something missing.

"The longing in my heart to belong somewhere just seemed to grow," she said. "I really wanted to find unity in church and have a place for my kids to grow and have consistency of values and faith."

Her grandparents, who helped raise her, were Catholic, and she had always felt drawn to the Church.

She had also met some "Godly and sincere" women who happened to be Catholic. On a particularly difficult day during her husband's fourth deployment -- this time to Afghanistan -- Olivia broke down and cried after she dropped her son off at his Catholic preschool. Every teacher and mother present came to pray over her. Their Christ-like actions impressed her, and she said that right away she knew that she wanted to become Catholic.

"It was just this love. It was the most amazing thing," she said, adding that she thought, "I want to be a part of whatever they're a part of."

In Afghanistan, Charles had been leading a Bible study, prayer group and Sunday service. Many of the men who attended were Catholic, and because of conversations with them, Charles began learning more about Church history and reading the Catechism of the Catholic Church.

He began to believe that God wants a unified Christian church rather than the many divisions that exist. He also saw that through history the unified Church has been very effective in evangelizing.

"Jesus himself prayed to protect our unity," he said. "Although God is still working powerfully through the efforts of Catholics and Protestants alike, I believe his original and best plan was for us to speak with one mind and one voice."

After his deployment, Charles and Olivia spent a lot of time on date nights talking about the Catholic Church. When they moved to Concord in 2013, they signed up for the Rite of Christian Initiation of Adults (RCIA) at Holy Family Parish.

At the Easter Vigil in 2014, they received first Communion and confirmation. They both said they were impressed by the beauty of the vigil ceremony and how it prominently features God's Word.

"It was the most beautiful, amazing service I had ever been to, and I remember being just so excited and giddy, like a little girl at Christmas," Olivia said.

She added that since that time, she feels a great sense of peace knowing that she is exactly where God wants her to be.

The Grays are preparing to move yet again, this time back to Missouri. They have already enrolled all three of their children in Catholic school for the fall. They both know that wherever they are in the future, they can find a Catholic community and experience being unified with the Church.

Charles said, "We say the same prayer in every Mass across the world. There's unity in that."