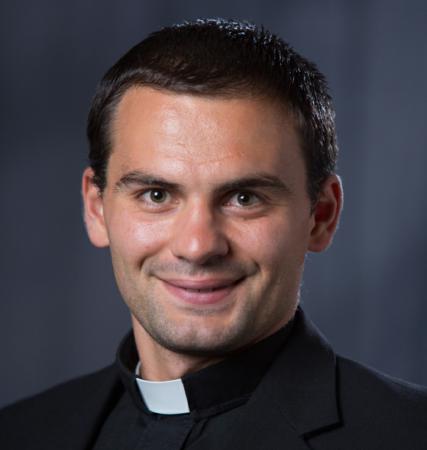 This week, The Pilot begins a series profiling each of the five men who will be ordained to the priesthood by Cardinal Seán P. O'Malley at the Cathedral of the Holy Cross on May 23.

Trusting in God is something Deacon Sinisa Ubiparipovic learned to do as he discerned his call to the priesthood.

Born in 1987 in the former Yugoslavia, Deacon Ubiparipovic was only six years old when his father, who was Serbian Orthodox, was killed during the Yugoslav Wars, leaving his mother, Mirjana Ubiparipovic to raise young Sinisa and his three-year-old brother Danijel. One year later, realizing the danger they faced by remaining in their homeland, she uprooted the family and moved to Germany. After five years, his family once again relocated -- this time to Lynn, where they still live today.

In Lynn, the Ubiparipovic family became parishioners at St. Joseph Parish. Deacon Ubiparipovic credits his then pastor, Father James Gaudreau, with "sowing the seed" of his vocation while he was in high school.

"I wouldn't say I was in love with God" during those years, he said.

Convinced pursuing the American dream would make him happy, Deacon Ubiparipovic attended Bentley University. While studying abroad in Madrid, he admits the "lure of college life" led him astray. Constant partying and drinking left him completely unfulfilled, he said.

The more he partied, the worse he felt. Until one day he realized that "the world offered me fun, but it didn't offer me fulfillment," he recalled.

According to Deacon Ubiparipovic, he began to ask himself, "What do I want? What do I seek? What is my long-term goal? What is the ultimate value of anything?"

"I realized that the ultimate value of anything is happiness, so I remember I knelt down in college and said to God, 'I want to be happy. I want to be married, to have children, to have a house. But if you want something else -- even if it's to be a priest -- let me know,' " he said.

His answer came when Pope Benedict XVI visited New York. Deacon Ubiparipovic attended the youth rally and felt "God was telling me, 'You can be a bridge for all these people.' It was then that I finally desired to reject the world," the 27-year-old remembered.

Deacon Ubiparipovic recalled that his brother "actually laughed" at him when he told the family he wanted to enter the priesthood. "(My brother) knows all my faults," he explained.

His mother, on the other hand, was supportive from the beginning.

"She never has imposed her own desires on me," he said, but has been very happy to see him pursue his calling.

"I experienced evil at a very early age," he said somberly. "But my mother was the real hero of my life. She worked very hard and sacrificed her life for us, and part of the fruit of that sacrifice is my vocation."

Reflecting on his years at St. John's Seminary, Deacon Ubiparipovic said, "There's been nothing but joy."

"I've had a great, great, awesome seminary experience, but I'm looking forward to serving the Church as a priest for the rest of my life," he continued. "Many may view this vocation as a sacrifice, but for me it's an honor."

Deacon Ubiparipovic is currently assigned as a transitional deacon at St. Joseph Parish in Needham.

"I've loved being there in every way possible," he said. "I've been humbled at being able to preach at the Masses on Sundays. It's been wonderful."

"Pursuing Christ fully in the vocation of the priesthood is fully worthwhile," he said. "The world needs a generation of young men who are virile and strong and willing to take a stand for Christ."