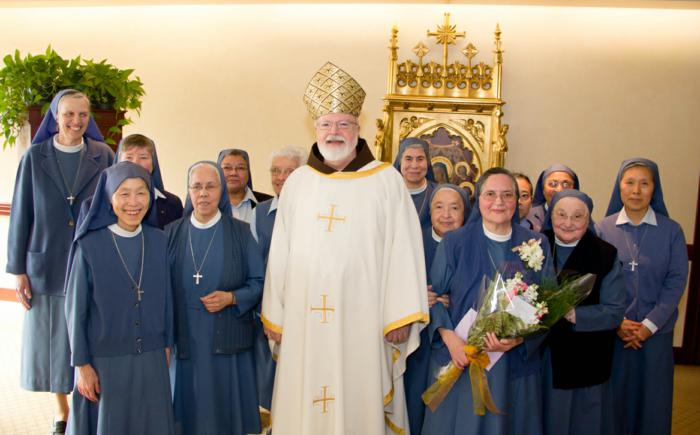 BRAINTREE -- As one of their own reached a landmark in her service this month, the Sister Disciples of the Divine Master continued their mission of prayerful and physical support for the priesthood and the spread of the Gospel centered on the Eucharist.

Cardinal Seán P. O'Malley celebrated a Mass at the Pastoral Center in Braintree to commemorate the golden jubilee of the profession of Sister Michelle Hernandez, PDDM, April 19, who has served for 50 years in the mission of the Sister Disciples of the Divine Master.

Founded in 1924 by Blessed James Alberione with founding leader Mother Scholastica, the community became part of the Pauline Family. The Pauline Family consists of 10 institutions dedicated to the spread of the Gospel, which includes five religious congregations -- the Society of St. Paul, the Daughters of St. Paul, the Sisters of Jesus the Good Shepherd, the Queen of Apostles Institute for Vocations or Apostoline Sisters, and the Sister Disciples of the Divine Master.

"Each religious community has a special charism, a special way of living out the various aspects of Christ's life and ministry. Blessed James Alberione defines for us the charism of the Sister Disciples of the Divine Master in the Eucharist, in ministering to priests, and in promoting the liturgical life of prayer and worship in our Church. For the Sister Disciples, the eucharistic life is not simply a devotion, but a mandated mission by the Church," the cardinal said.

After the renewal of her vows at the Pastoral Center Mass, she thanked those present from the active and retired archdiocesan priesthood, peers from some of the sister communities of the Pauline Family, her family and friends, and her fellow Sister Disciples of the Divine Master.

"My deepest appreciation and heartfelt gratitude to each and every one of you for your presence and the continual gift of yourselves in prayer and support," she said.

Speaking to The Pilot after the celebration, Sister Lucille Van Hoogmoed gave further details about the mission of the Sister Disciples of the Divine Master. Sister Lucille serves as the vicar to the Delegate Superior Sister Josephine Fallon, the leader of the congregation in the United States.

She explained that Sister Nieves Salinas serves as the local superior of the community of 12 sisters with a residence on West Street in Boston.

Through the local superior and the delegate superior, the sisters coordinate with the general government in charge of roughly 1,400 sisters in 31 countries. Superior General Sister Regina Cesarato and her council constitute the general government, functioning to the congregation in a similar way as a bishop to a diocese.

Visitors of the Pastoral Center in Braintree likely see the sisters frequently. Sister Lucille works in the Clergy Personnel Office alongside another sister in the Office of the Cardinal, while two sisters usually work at the gift shop and serving in the chapel.

In those duties, and in additional duties to those at the Pastoral Center, the sisters support the priesthood throughout their lives, aiding in the preparation of the liturgy, and through support of retired priests just as Sister Michelle serves at Regina Cleri. Sister Lucille compared the relationship between the sisters and the priesthood with the relationship between Mary and Jesus Christ.

The origins of the congregation stem directly from, and through, prayer.

In eucharistic adoration in the evening between the centuries in 1899, founder Blessed Alberione conceived of a mission of spreading the Gospel to the people of the newly-dawning century. Over time his efforts focused largely on forwarding the Gospel in the modern world through prevalent means of communication available then -- the press.

"With that inspiration of spreading the Gospel through the means of communication, he decided eventually to found a group of priests and sisters who would use those means. So, the Society of St. Paul was founded in 1914, the Daughters of St. Paul 1915, but he always felt that there was need to maintain everything through prayer. So, everything had to be centered in the Eucharist, that's where our group comes in," Sister Lucille said.

The founder recognized the importance of a commitment to prayer life centered on the Eucharist as central to the authentic spread of the Gospel in the context of the 20th century. The charism of the Sister Disciples of the Divine Master embody that commitment as they help priests prepare for Mass at Bethany Chapel, staff the gift shop, and work in the ministries of the archdiocese, but also as they pray with the Eucharist as the center of their spiritual mission.

Sister Lucille said the sisters now continue, in a sense, a little tradition of Mother Scholastica, the first mother general.

"One of the things she used to do was bring the newspaper to Church, to bring the needs of the world to Jesus in the Eucharist," she said.