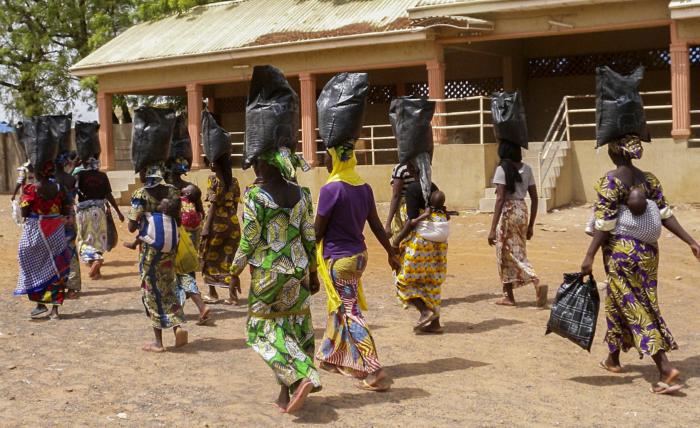 Displaced people who fled areas of conflict waged by Boko Haram militants carry food supplies on their heads April 15 as they walk away from a special prayer service at St. Theresa's Cathedral in Yola, Nigeria. (CNS photo/EPA)

MANCHESTER, England (CNS) -- A new report has revealed the scale of suffering of Nigerian Catholics at the hands of Boko Haram militants, with 5,000 Catholics killed in one diocese alone.

A further 100,000 Catholics in the Diocese of Maiduguri, in the northeast of the country, have been displaced by the six-year campaign of violence conducted by the Muslim militant group, according to the "Situation Report on the Activities of Boko Haram in the Catholic Diocese of Maiduguri."

There are now about 7,000 widows in the diocese and nearly 10,000 orphaned children, said the report. Among the diocese's displaced are 26 of 46 priests, 200 catechists and 20 religious sisters, the report found.

The diocese includes the entire states of Borno and Yobe and part of Adamawa state. More than 350 churches in the diocese have been the targets of terror attacks with "a good number of them destroyed more than once," the report said.

Aid to the Church in Need said 22 of the Maiduguri Diocese's 40 parish centers and chaplaincies have been deserted by Catholics. Many are occupied by Boko Haram militants, who control about three-quarters of the territory of the diocese, the report said. It said 32 of the 40 church-run primary schools have been deserted, and four of the diocese's five convents are closed.

The information was sent to the U.K. branch of Aid to the Church in Need, and a summary of its findings was issued in a May 11 statement by the charity, which was set up to help persecuted Christians.

Father Gideon Obasogie, the diocesan director of social communications, told the charity: "People are very scared, and those who are able to return home find there is nothing left. ... A life lived with much fear is terrible."

But he added that the persecution had "purified" the faith of the suffering Catholics of the diocese,

"The good Lord has always been on our side," he said. "He has seen us through thick and thin. Our faith has been purified through persecution."