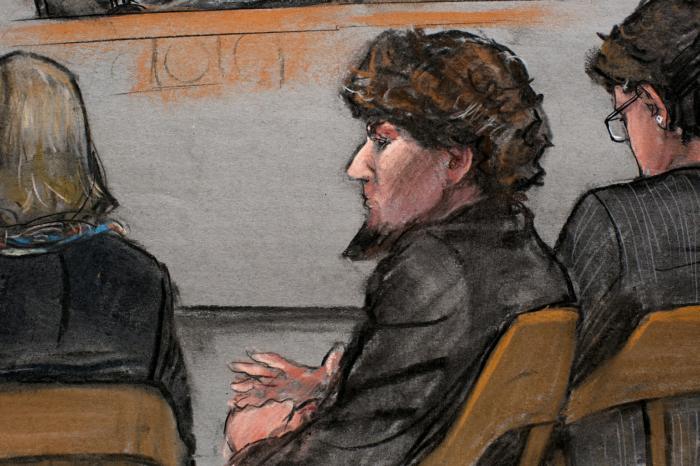 A courtroom sketch shows accused Boston Marathon bomber Dzhokhar Tsarnaev during closing arguments April 6 in his trial at the federal courthouse in Boston. The bishops of Massachusetts urged against a death sentence for the bombing defendant, reiterating Catholic teaching that says cases where capital punishment is acceptable are practically nonexistent. (CNS illustration/Jane Flavell Collins via Reuters)

What does the Church teach on capital punishment?

A jury in Federal court in Boston has sentenced Dzhokhar Tsarnaev to death on six counts related to the April 15, 2013 Boston Marathon Bombing. The jury had deliberated for over 14 hours over the course of three days.

On April 8, a jury in Federal court in Boston found Tsarnaev guilty on all 30 counts related to 2013 bombing. They found that Tsarnaev and his older brother Tamerlan Tsarnaev planted the bombs that exploded near the finish line at the marathon, maiming and wounding more than 260 people and killing 8-year-old Martin Richard of Dorchester; 29-year-old Medford native Krystle Campbell; and Lu Lingzi, 23, a Chinese national studying at Boston University. Later, the pair killed Massachusetts Institute of Technology police officer Sean Collier as they attempted to make an escape from the Boston area.

Having found him guilty the jury had been asked to decide whether Tsarnaev should face death or life in prison without parole.

While the question of capital punishment for Tsarnaev divided the local community, several high profile voices spoke out against the death penalty for the Marathon Bomber.

On the day Tsarnaev was convicted, the four diocesan bishops of Massachusetts released a statement reiterating Church teaching on the death penalty and urging life imprisonment.

"The defendant in this case has been neutralized and will never again have the ability to cause harm," the bishops wrote.

"Because of this, we, the Catholic Bishops of the Commonwealth of Massachusetts, believe that society can do better than the death penalty. As the Bishops of the United States said in their 2005 statement A Culture of Life and the Penalty of Death, 'no matter how heinous the crime, if society can protect itself without ending a human life, it should do so.' We believe these words remain true today in the face of this most terrible crime," they said.

In the letter entitled "To end the anguish, drop the death penalty," the Richard's asked that the Department of Justice bring the case to a close as soon as possible.

"We are in favor of and would support the Department of Justice in taking the death penalty off the table in exchange for the defendant spending the rest of his life in prison without any possibility of release and waiving all of his rights to appeal," they wrote.

"We understand all too well the heinousness and brutality of the crimes committed. We were there. We lived it. The defendant murdered our 8-year-old son, maimed our 7-year-old daughter, and stole part of our soul," they wrote.

"We know that the government has its reasons for seeking the death penalty, but the continued pursuit of that punishment could bring years of appeals and prolong reliving the most painful day of our lives. We hope our two remaining children do not have to grow up with the lingering, painful reminder of what the defendant took from them, which years of appeals would undoubtedly bring," they wrote.

Also, during the penalty phase of the trial anti-death penalty advocate Sister Helen Prejean testified that she had met several times with Tsarnaev five times in the preceding months and said he has shown remorse for his crimes -- a mitigating factor that could have steered the jury away from imposing death.

"He said emphatically, 'No one deserves to suffer like they did,'" Sister Prejean told the jury, according published reports.

However, despite Sister Prejean's testimony, a number of victims and observers who had seen Tsarnaev in courtroom over the course of months said they saw little or no display of emotion or remorse during the trial.