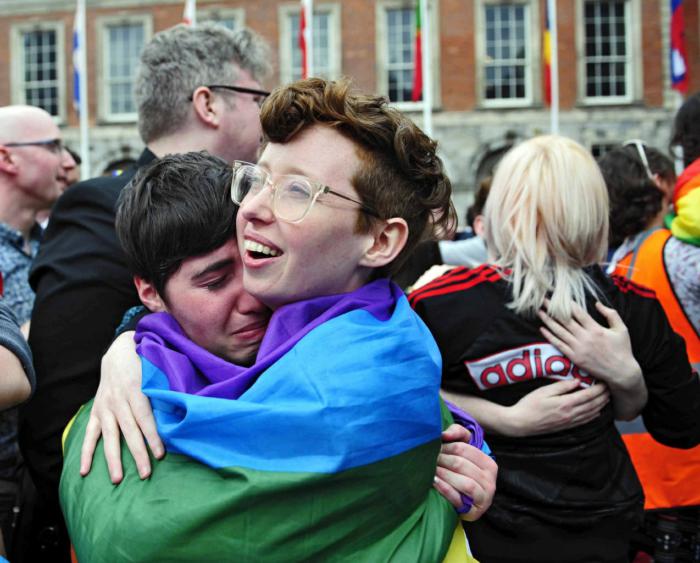 People embrace as the final vote of the referendum on same-sex marriage is announced May 23 in Dublin. Archbishop Eamon Martin of Armagh, Northern Ireland, president of the Irish bishops' conference, says the church must do more to reach out to gay people. (CNS photo/Aidan Crawley, EPA)

Reacting to the May 22 poll, in which voters supported same-sex marriage by a margin of 62 percent to 38 percent, Cardinal Burke told the Newman Society, Oxford University's Catholic Society: "It's just incredible. ... Pagans may have tolerated homosexual behaviors, they never dared say this was marriage."

Asked about the comments during an interview with RTE Radio, Archbishop Eamon Martin of Armagh, Northern Ireland, president of the bishops' conference, said June 2, "I wouldn't use that language."

He said: "Throughout the debate and the discussion, we did ask people to try to be respectful and inoffensive in language."

The archbishop also referred to comments by the Vatican secretary of state, Cardinal Pietro Parolin, that the result represented a "defeat for humanity."

"I think what Cardinal Parolin was expressing is our deeply held conviction about marriage ... he was trying to express the loss that occurred here," he said.

Asked whether the church would baptize the children of same-sex couples, the archbishop said, "there's no difficulty ... whenever someone comes to bring their child for baptism, what we're interested in is that child able to be raised as a member of the church and of course they are."

He admitted that the Catholic Church is facing challenging times in the wake of the referendum result.

"The whole debate has helped us understand the great sense of alienation and isolation that many gay people have felt, perhaps even at the hands of the church," he said. "I think that one of the lessons in the church that we have to learn from this debate is how do we reach out pastorally to people."

The archbishop later told The Irish Catholic newspaper that he wanted to "affirm people who took a courageous decision to speak up for the union of marriage between a man and a woman in this country."

"It's about trying to marry this wonderful teaching of the church with the many pastoral challenges we are facing," he said.

"I am aware that people are trying to live the difficulties and challenges of the Christian way of life in the modern world. The only way to do that is with a heart full of the mercy of God. In this way, we are able to accompany people and encourage them to have a personal relationship, while at the same time be called to conversion and called to change in their lives," he said.

Referring to the result of the referendum, Archbishop Martin said: "We have to remain courageous with our message. More people than we think do support the church's understanding of marriage. We have to be strong."

He said that, despite the referendum result, "The task of witnessing to the family still remains.

"In fact perhaps now it's more important than ever that we continue to witness strongly, confidently and in a committed manner to what is such a core teaching for society," the archbishop said.

He said one of the lessons of the referendum was that the church must find a language to express church teaching in a way that is not alienating.

"Sometimes language can be offensive to people, and we need to be aware of this. We (the bishops) have appealed for people not to use language that is offensive." He said that the problem was magnified by the fact that the church often uses language that makes sense in a theological or philosophical context, but not in the context of public discourse.