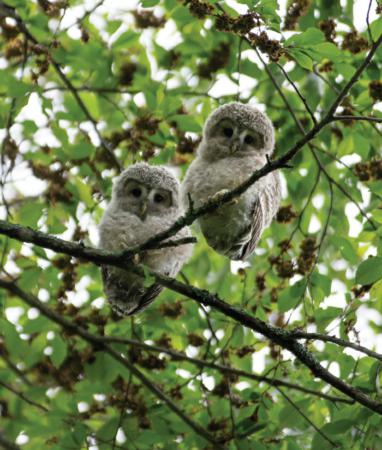 Ezo owl chicks sit in a tree just after leaving their nest on Hokkaido Island, Japan in June 2014. Few papal encyclicals have been as eagerly awaited as Pope Francis' statement on the environment expected to be issued later this month. CNS photo/Kimimasa Mayama, EPA

BOSTON -- Taking a cue from his beloved namesake saint, Pope Francis is expected to articulate the Catholic Church's view of ecology when he releases his first encyclical this month.

Reportedly titled "Laudato Sii" ("Praised Be You"), observers expect the encyclical to evoke "The Canticle of the Sun," which was written by St. Francis of Assisi in the early 13th century. In his famous canticle, the saint thanks God for the creations of "Brother Sun" and "Sister Moon" and refers to the animals as brothers and sisters to mankind.

"St. Francis was an early patron saint you could almost say of the environment," said Father James Bretzke, a professor of moral theology at Boston College.

Father Bretzke said Pope Francis is making an interesting statement in choosing "Laudato Sii" as the incipit, or beginning, of his encyclical. "Laudato Sii" is the opening phrase of the "Canticle of the Sun," an early example of sustained Italian prose.

"Incipits are important. They indicate in a couple of words what the direction of the document is supposed to be about," Father Bretzke said. "What the pope seems to be doing in this document is invoking a more personal approach to care for the environment. He's looking to St. Francis who is noteworthy among the saints for being an early ecologist and having an all-embracing spirituality of all of creation."

In a sense, Pope Francis is continuing a teaching trend set by his two immediate predecessors, Popes St. John Paul II and Benedict XVI. Both often spoke and wrote about the Church's care for the environment and Catholics' obligation to care for the earth as stewards of God's creation.

In his 1990 World Day of Peace message, Pope John Paul II said it was necessary that the "entire human community," individuals, states and international bodies, "take seriously the responsibility" to guard against environmental degradation, including depleting the ozone layer and creating a related greenhouse effect.

Pope Benedict XVI, nicknamed in some quarters as the "green pope" for his embrace of ecology and renewable energy, wrote in the encyclical "Caritas in Veritate" that the protection of the environment, of resources and of the climate "obliges all international leaders to act jointly and to show a readiness to work in good faith, respecting the law and promoting solidarity with the weakest regions of the planet."

C.J. Doyle, executive director of the Catholic Action League of Massachusetts, said Catholicism has traditionally criticized liberal capitalism as an economic system, particularly in its treatment of workers and debtors.

"It is consistent therefore, with traditional Catholic social teaching, to extend that critique to an examination of the impact on God's creation, the natural environment," Doyle said.

Doyle added: "We should remember, especially in Boston, that an indifference to the environment had a devastating impact on inner-city Catholic communities when, a half century ago, a corporate-driven public policy to promote highway construction obliterated urban Catholic neighborhoods. It was the incipient environmental movement which finally halted the injustice of eminent domain."

Whereas Pope Benedict XVI often couched his writings in abstract terms, Father Bretzke said Pope Francis will likely be more direct in engaging the Catholic view of ecology, and that includes the contentious climate change debate.

Joining the overwhelming international scientific consensus, several Vatican officials have described climate change as a real threat caused in large party by the anthropogenic emissions of greenhouse gases and pollutants. In May 2011, a Pontifical Academy of Sciences working group issued a report calling upon nations to recognize "the serious and potentially irreversible impacts of global warming."

"I think (Pope Francis) is definitely going to say the scientific evidence about climate change and the human participation in it is now settled, and that is going to be difficult for some people," said Father Bretze, who noted that some commentators have been launching "preemptive strikes" against the encyclical.

"There has been a lot of pre-release positioning going on in various quarters in the Church," Father Bretzke said.

In the months leading up to the encyclical's release, several Catholic analysts, many of them of a conservative political bent, have expressed concerns and doubts about the wisdom of Pope Francis writing on climate change, which they argue is not settled science. Some are also worried that the pope's stance on climate change and any suggested policy steps could embolden international organizations that connect sustainable development initiatives with family planning programs that include contraception and abortion.

Doyle warned about any cooperation with an ecological movement that is "militantly secularist, profoundly anti-life and intrinsically committed to population control."

"There is also the risk that some in the Church will exploit the encyclical to revive the seamless garment argument in order to diminish the centrality of the struggles to defend the sanctity of innocent human life, and preserve the integrity of traditional marriage and the natural family -- the two greatest challenges in the moral order confronting what remains of Christian civilization today," said Doyle, who added that neither the pope nor the bishops have a specific competence in scientific matters and that no ecclesiastical authority can bind Catholics in matters that require prudential judgments.

Father Bretzke said the Church calls on Catholics to listen carefully to the magisterium, to consider its teachings and seek to understand them fully to guide their prudential decisions. Father Bretzke said it is not an adult faith to dismiss inconvenient teachings just because they do not carry the authority of infallibility.

In their obligations to teach, govern and sanctify the faithful, the popes will often speak and write on a wide variety of issues, from abortion and same-sex marriage to the death penalty, migration and the global economy.

"All that is part of the teaching because it helps us to live together and helps us in the process of becoming more of what we were created to be," Father Bretzke said.