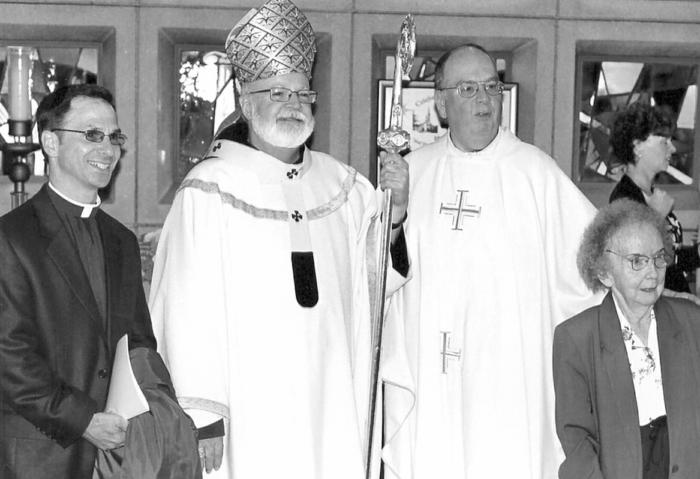 Father Michael McLellan (second from right), pastor of St. John the Evangelist Parish in Canton, died before the start of a Sunday-morning Mass on April 26. He is seen here at the parish's 150th-anniversary celebration in June 2011 with, from left, Father Bryan Parrish, Cardinal Seán P. O'Malley and the late Virginia Hagerty, a longtime parishioner. Pilot photo/courtesy St. John the Evangelist Parish

Two months after the tragic death of their beloved pastor, members of St. John the Evangelist Parish in Canton are still going through the healing process while they await the appointment of their new spiritual leader.

Father Michael McLellan, known as "Father Mike," died unexpectedly prior to the start of the 11:30 a.m. Mass on Sunday, April 26 -- Good Shepherd Sunday. The popular priest, who was first assigned to St. John the Evangelist in 2008, and also served as chaplain of the MBTA Police, was 64 years old.

Msgr. Charles Bourque, a retired priest who made St. John the Evangelist his residence seven years ago at Father McLellan's request, has been named parish administrator for the time being. Meanwhile, no timetable has been set for naming a permanent administrator, according to Father Bryan Parrish, Interim Episcopal Vicar and Secretary for Parish Life and Leadership.

Father Parrish, who grew up as a St. John the Evangelist parishioner, described Father McLellan's death as "a great loss," describing him as "a very caring pastor" who "had a shepherd's heart."

He also praised Father Bourque for his work as administrator, saying, "He's brought a lot of compassion and care and stability."

Indeed, despite the unusual circumstances of Father McLellan's sudden passing, parishioners have managed to maintain a sense of normalcy.

Father Bourque said he has witnessed a positive spirit in the parish community despite its loss, in part because many church members -- like everyone else -- have dealt with death throughout their lives.

"The people are great. I've received encouragement from (many parishioners)," he said. "I think they're doing fine. It's like dealing with the death of a family member."

Father Bourque, a seminary professor of the late pastor, described Father McLellan as a longtime friend who had many of the attributes that any faithful priest should have.

"He had very great qualities," he said. "He was easygoing, had a sense of humor, and was a very, very bright guy -- very knowledgeable."

Although he said Father McLellan hadn't been feeling well in recent days, Father Bourque noted that he seemed fine following the 7:30 a.m. Mass on April 26. That was the last time the two men spoke.

Parish business manager Maggie Rubenacker, however, was in the church that day when Father McLellan collapsed.

She said "he was his usual smiling, boisterous self" as he greeted parishioners, but once she was seated, she quickly became aware that something was wrong.

"The music started for the processional hymn but Father did not appear," said Rubenacker. "I heard a shout and ran to the back of the church where he lay on the floor. In front of his parishioners, CPR was performed by medical professionals in the congregation, the paramedics came, and I went with him to the hospital and waited with him until his family could arrive. This was God's gift to me. If I had not been there, I would have always wondered if we could have saved him."

Rubenacker added that Father McLellan left a positive and lasting impact on the parish.

"Father Mike was affable, genuine, outgoing and proud to be a priest," she said. "He also was everybody's big brother, father figure, and friend. He not only advocated for social justice; he walked the walk. During his tenure here at St. John's, we have become a parish which represents many backgrounds and cultures."

Keri McNamara, an office assistant at the parish, also praised the late pastor.

"Father Mike was generous with his time for any and all who needed him," said McNamara. "He was a friend and a teacher of faith."

Lifelong parishioner George Jenkins, 76, who spoke with the pastor about a half-hour before he died, agreed that Father McLellan was a "great guy" who gave wonderful homilies. But also believes the parish is in good hands with the current administrator.

"Father Bourque has been tremendous," said Jenkins. "Everybody loves the man. He had big shoes to fill, but he just slid through, like grease through a tin horn. Are we better off? Of course not. Are we moving along fine? Absolutely.''