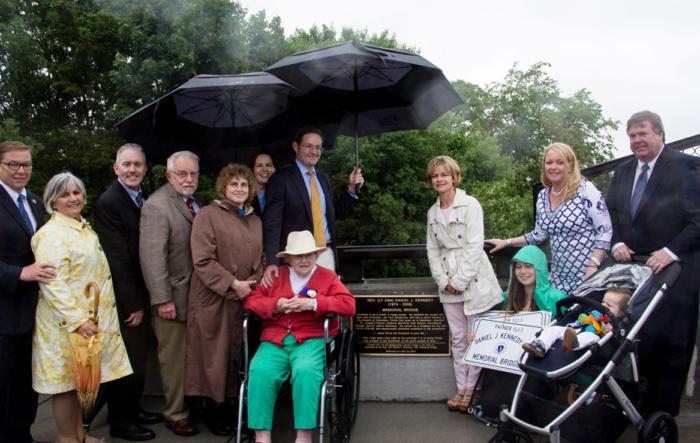 NEEDHAM -- After a ceremony and blessing to honor a late beloved priest of the Archdiocese of Boston, June 15, traffic passed over the Father (Lt.) Daniel J. Kennedy, United States Navy, Memorial Bridge at the intersection of Great Plain Avenue and Route 128 in Needham for the first time since the restoration of the overpass.

Father Kennedy, who grew up in Needham, died unexpectedly in January 2008, only seven months after his ordination to the priesthood. He had just celebrated his 34th birthday.

Cardinal Seán P. O'Malley joined a ceremony with city, state and local officials, and the friends and family of Father Kennedy, before the group made a short procession from St. Sebastian's School and St. Bartholomew Church to the bridge.

"As a priest, Father Dan was himself a bridge between God and his people. In his ministry, the mercy of Christ and the love of God was revealed to us. We gather today to give thanks to God for the gift of his life and his priesthood," said the cardinal in his opening prayer at the ceremony.

Sen. Michael F. Rush (D.) West Roxbury sponsored the bill to dedicate the bridge in Father Kennedy's honor. He served as master of ceremonies at the ceremony before the blessing of the bridge. The close friend of Father Kennedy was visibly moved as he spoke.

"A bridge is a powerful symbol, and in this case extremely meaningful. I am mindful today of the many times that Danny crossed that bridge in his life. I am mindful thinking of Danny with terms also like 'building bridges,'" he said.

Brother of Father Kennedy, Jack Kennedy, spoke on behalf of the Kennedy family. He thanked the community represented for their support, and their support since his brother died.

"We all miss Danny. We all have fond memories of Danny, and it's days like this that I want you all to know how meaningful it is for our family to celebrate his life in this way," Jack Kennedy said.

Father Matthew J. Wescott, a 2007 classmate of Father Kennedy, gave the blessing after the procession reached the bridge.