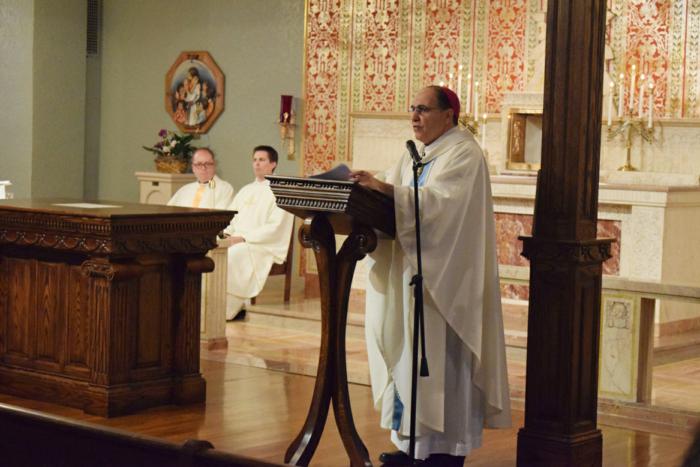 DORCHESTER -- Honoring both the church's past and bright future, the community at St. Ann Parish in Dorchester dedicated its renovated lower chapel. The altar, constructed using the previous altar stone and wood reclaimed from the chapel's damaged pews, was dedicated to Martin Richard who passed at the Boston Marathon Bombing in 2013.

Archdiocese of Boston Vicar General, Bishop Peter J. Uglietto celebrated Mass for the dedication on July 26, the Feast of St. Ann. Also in attendance were the Richard family, who worship at St. Ann's, administrator Father Thomas Macdonald and Father Sean M. Connor, who was pastor when the lower church project began.

Father Connor said that when he began as pastor in 2008, a river ran through the church basement. Due to a shifting water table, rain runoff and the church's location on a slope, the lower church was more wetland than worship space. Once the water was diverted, damage and mold had been left in its wake. After that was cleaned up, the restoration work began in earnest.

St. Ann's lower church was once the parish's main worship space. In 1895, a fire destroyed the parish's first church building. The community worshipped in several temporary sites before the new lower church was completed in 1916; it was many years before the main church was finished. At the time, the area was mostly farm land and home to Irish and Italian immigrants. After World War II, new homes were built for veterans.

The area continues to be home to working class families, many of whom have worshipped at St. Ann for generations. They serve the community as police officers, firefighters, nurses and teachers. Father Connor said they are strong people of good faith who respond when there's a time of need.

That is precisely what the parish did after members of the community were affected by the Boston Marathon bombing. Bill and Denise Richards and their three children were near the second blast site. Both of the parents were injured. Their oldest son was physically unharmed, but their daughter lost her leg and their son Martin was killed.

At the end of the Mass, Father Connor addressed the crowd, saying that while the parish restored the chapel to beauty "something tragic happened."

"You responded in the streets and this church and all around -- praying, trying to counter the bad that was brought here with peace, the peace that Jesus gives us," he said.

Father Connor said that the entire parish community responded to evil with goodness and love. The Richards have done the same, starting the Martin W. Richard Foundation with the goal of spreading the message of peace. A photo of Martin holding a sign that read, "No more hurting people. Peace" was widely circulated after his death.

Speaking with The Pilot after the Mass, Father Connor said that parishioners wanted to honor Martin by dedicating the chapel altar to him. Their response is a sign of the depth of their faith.

Walking around the chapel, Father Connor pointed out the plaque honoring victims of clergy sexual abuse and a candle for the 20 children who died during the 2012 school shooting in Newtown, Conn.

The chapel now seats 350 plus there is room for chairs in the back. Unlike the upper church, it has air conditioning and will serve as the main worship space during the sticky summer months. The old stained glass windows were polished, the marble work was cleaned, pews were restored and statues of Mary, St. Ann, St. Francis Xavier and Joseph holding the child Jesus were brought back to their former glory.

For the recessional hymn, the choir sang, "Let there be peace on earth, and let it begin with me."

"That song always gets me," said Barbara Kelleher, a parishioner for 20 years.

She added that she was moved by the music, which honors the life of Martin Richard. She called the tribute to him "fitting."

Long-time parishioner and director of religious education Paula Skalinski said that the altar will continue to serve as a symbol of peace and hope. At vacation Bible school last week, she explained that symbolism to the children, many of whom knew Martin.

She added that the parish should celebrate the new chapel. "We've been waiting a long time," she said.