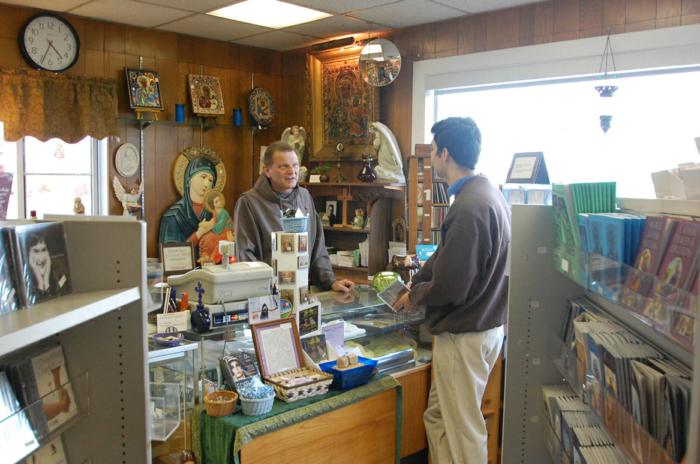 In 1960 Richard Cardinal Cushing, the Archbishop of Boston, invited the Franciscan Friars of the Atonement to send some friars to establish the presence of our community in the archdiocese. The friars felt deeply privileged to be admitted into the archdiocese, and Cardinal Cushing wanted them to "conduct a public Chapel and Information Center in the South Shore area." His concept was to establish a "chapel of convenience" to serve the increasingly suburban and mobile faithful in the southern part of the diocese. Since it was established, there have been 15 friars who served as directors of the Chapel of Our Savior, Brockton, and another 48 who have supported the mission and continue to help the many visitors to the Chapel and gift shop.

The Franciscan Friars of the Atonement always have been dedicated to promoting healing and reconciliation so that all may know the love that the Father has for us, as profoundly evidenced by the sending of his Son Jesus Christ for our salvation.

In 1898, Father Paul Wattson, SA, Servant of God, Apostle of Christian Unity and Charity, founded the order whose main mission was reconciliation and healing through atonement -- the unity of men and women with God and with one another, and this has been the focus of the friars' ministries.

Father Watson, born on Jan. 16, 1863, in Millington, Maryland, was the son of Rev. Joseph Wattson and his wife Mary Electa Wattson. In 1898, 12 years after his ordination as an Episcopal priest, in collaboration with an Episcopal nun, Lurana White, he helped to found the Society of the Atonement at Graymoor in Garrison, NY, formed in the tradition of corporal poverty of the Franciscans with the mission of promoting Christian unity and helping the poor. In 1908, Father Paul initiated the Church Unity Octave, a time set aside for prayer and seminars to hasten Christian unity. Both advocates of corporate reunion between the Anglican and Catholic churches, he and Mother Lurana White made a decision to enter into full communion with the Roman Catholic Church in 1909, and Father Paul was ordained a Catholic priest in 1910.

An apostle of both Christian unity and charity, Father Paul founded St. Christopher's Inn, a refuge for homeless men. Father Paul was committed to evangelizing the faith. He published The Lamp, a monthly magazine devoted to Christian unity and the missions, and he produced The Ave Maria Hour, a radio program that broadcasted stories about the life of Christ and the lives of the saints that was on the air from 1935 to 1969. In 1903 he founded an organization, the Union-That-Nothing-Be-Lost, to disperse donations to other charitable organizations. He also co-founded the Catholic Near East Welfare Association and was instrumental in helping to launch the Catholic Medical Mission Board.

Father Paul died in 1940; he never lived to see the beginnings and growth of the Brockton ministry in the Boston Archdiocese, but the friars are sure he would be quite pleased with this hub for the faithful that allows each person to grow in Christ.

In the midst of the busy commerce of Brockton's Westgate Shopping Center, the friars at the Chapel of Our Savior celebrate Masses from Tuesday to Saturday at 12:05 p.m. and at 5:30 p.m. and at 7:00 p.m. on Saturday evenings; morning prayer, reconciliation, Bible study, anointing of the sick, Holy Hours, daily recitation of the rosary and novenas are among the other regular liturgical and devotional celebrations at the chapel.

The Franciscan Friars of the Atonement in residence offer spiritual guidance and direction, and Franciscan hospitality as they have for over 50 years. In 2011, when the Chapel celebrated its 50th anniversary, we gathered some annual facts about the reach of this ministry, finding that the Chapel distributes 171,500 hosts per year and anoints 3000 people. Each year, the friars' and the faithful pray daily community rosary before the 12:05 Mass, offering 16,536 Hail Marys.

The Chapel is an oasis of prayer and reflection. Its interior is quite special with a 4,480 pound Carrara marble altar, and its magnificent stained glass windows designed by Florentine artist, Marcello Tolleri. The Chapel gift shop carries religious items and cards, and proceeds support the friars in our work.

I first came to Chapel of Our Savior in 1968, as a Brother, assigned to cook the meals. The friars have brought to Brockton a spirit of welcoming and hospitality along with their charism of atonement and unity. We are blessed with the support and friendship of those who come to this Chapel in Brockton, and who allow us to fulfill our vision to "Bring Christ to the Marketplace." For more information visit ChapelofOurSaviorBrockton.org.

Father Gerald DiGiralamo, SA, originally from Astoria, NY, celebrated his golden jubilee on June 28, 2015, marking 50 years since entering the Franciscan Friars of the Atonement. Currently, he is serving in the sacramental ministry at Chapel of Our Savior, Brockton, Massachusetts.