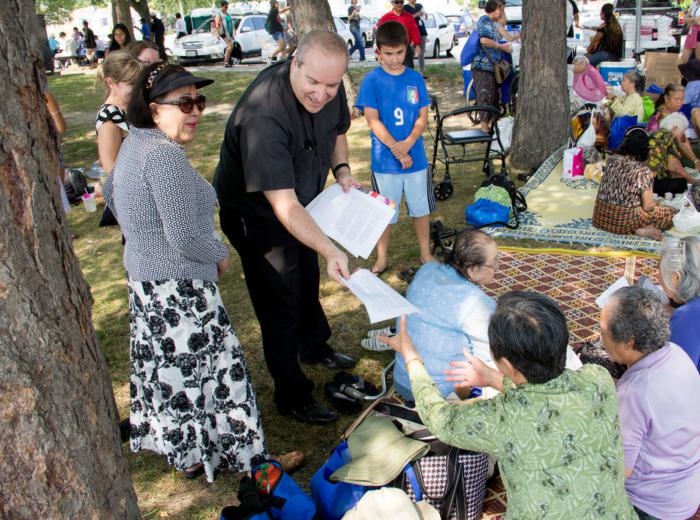 LOWELL -- As parishes in collaborative ministry move toward a focus on intentional discipleship in the new evangelization, priests and parishioners in the Archdiocese of Boston are looking for new ways to bring the Church to those who have drifted away.

For parishioners of the Phase III Collaborative at St. Marguerite d'Youville Parish in Dracut, St. Mary Magdalen Parish in Tyngsborough, and St. Rita Parish in Lowell, that means going door-to-door in groups accompanied by their pastor Father Richard F. Clancy.

The Saturday door-to-door program begins with a morning Mass followed by exposition of the Blessed Sacrament with adoration and confessions. After that, a group goes out to walk the streets, knock on doors and give people a letter from the pastor and a bulletin. While the group is out on the street, other parishioners stay in front of the Blessed Sacrament praying for them.

Father Clancy said he would recommend that other parishes make such outreach a priority in the future.

Father Clancy said the fall will bring the opportunity to head out to community events, possibly giving out coffee at high school sporting events.

"Our youth group and our high school kids are going to be getting involved in the fall too," Father Clancy said.

On Aug. 15, one of these groups accompanied by their pastor started out at St. Rita's and walked down a few streets in the local area.

Gary Murchie, a parishioner and sacristan at St. Rita's, went with the group for the first time that day and ran into more than one person he knew from the neighborhood during the walk, which Father Clancy said contributed to the effort in an important way.

"It's helpful because it's an introduction, he said.

Those they meet might say, "I don't know who that guy is, but I know Gary," Father Clancy said.

Murchie said he had a positive experience with the neighborhood outreach.

"I enjoyed going out there. I'll do it again," he said.

Joani McCann, a consecrated virgin in the archdiocese, helps to coordinate the outreach effort.

"Right now we're trying to get together a large map of the area, so that we can mark up all the places we've been and do more planning," she said.

McCann also pointed out the beauty of having the prayerful support of those in adoration as the group gets out into the neighborhood.

"They're sitting in front of the Blessed Sacrament praying for us, so they're with us in support while we're out there," she said. "So the people you see in the street are not necessarily the only people involved. Our team is also very much so the people that are praying for us."