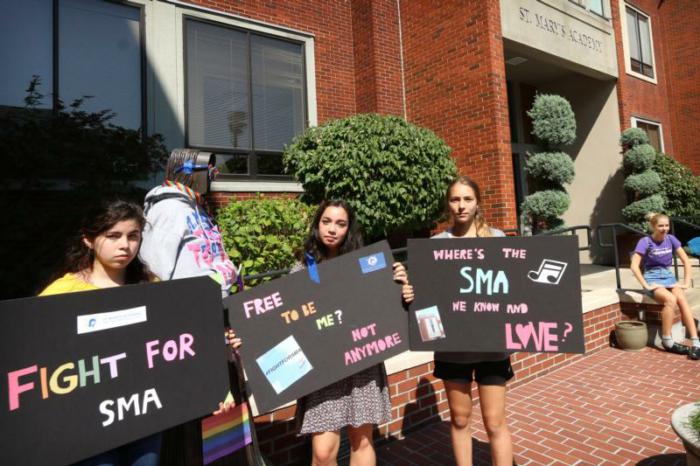 Students from St. Mary Academy in Portland, Ore., protest in front of their school Aug. 26 after learning that school officials had withdrawn a job offer to a counselor who announced plans to enter a same-sex marriage. Later that night, the schoolÕs board of directors reversed course and said the school would welcome people in same gender marriages for employment. (CNS photo/Ed Langlois, Catholic Sentinel)

PORTLAND, Ore. (CNS) -- The Archdiocese of Portland plans to stay in talks with an all-girls school that now says it will welcome employees who enter same-sex unions recognized as marriages by civil authorities in Oregon.

St. Mary's Academy, the oldest Catholic school in Oregon, expanded its hiring policies Aug. 26. The Portland school faced pressure after rescinding a counseling job offer to Laura Brown, 27, who told St. Mary officials that she planned to marry another woman.

Before the late-night policy reversal, Portland Archbishop Alexander K. Sample had voiced support for the school and the Sisters of the Holy Names of Jesus and Mary, saying they were upholding teachings of the Catholic Church.

But after the academy's board of directors flipped course, the archdiocese simply said it is aware of the decision and will continue conversations with school officials.

Earlier Aug. 26, Portland Mayor Charlie Hales and one of the school's top donors -- Tim Boyle, CEO of Columbia Sportswear -- criticized the cancellation of the job offer. He was joined by students who spoke out on social media. Some alumnae threatened to withdraw financial support for the prep school that enrolls 725 girls.

Later in the evening, after calling a meeting with the school's board of directors, academy president Christina Friedhoff announced the change.

"This evening the board of St. Mary's Academy voted unanimously to support the administration's recommendation to amend and broaden St. Mary's policy on equal employment, bringing our employment policies in line with our mission and beliefs," said the statement from Friedhoff. "Effective immediately, St. Mary's has added sexual orientation to its equal employment opportunity policy."

Friedhoff called the school "a diverse community that welcomes and includes gay and lesbian students, faculty, alumnae, parents and friends, including those that are married. We are proud of our work preparing the next generation of women leaders for service and leadership. We are still deeply committed to our Catholic identity."

The school already had filled the position offered to Brown, but will reach out to Brown to discuss options for possible reconciliation.

Canon law says this about faculty at Catholic schools: "The instruction and education in a Catholic school must be grounded in the principles of Catholic doctrine; teachers are to be outstanding in correct doctrine and integrity of life."

Canon law also says bishops have a right to "watch over" schools in their dioceses.

Langlois is a staff writer at the Catholic Sentinel, newspaper of the Archdiocese of Portland.