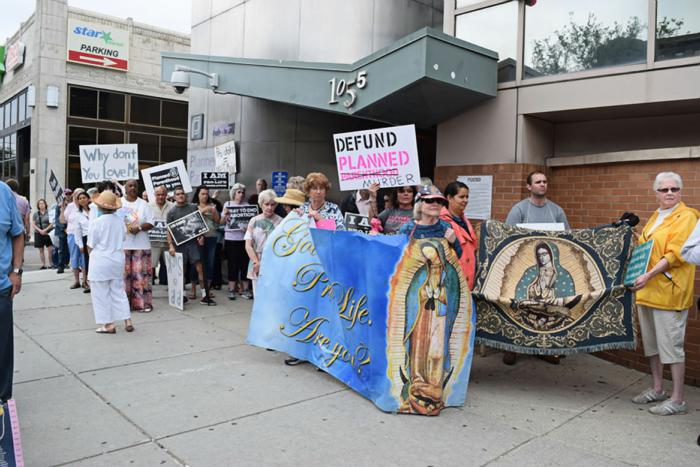 Protestors gather outside the Planned Parenthood clinic on Commonwealth Avenue in Brighton, Aug. 22. The demonstration was one of more than 300 coordinated protests across the country spurred by series of undercover videos showing Planned Parenthood employees negotiating the sale of fetal organs. Pilot photo/Christine M. Williams

BOSTON -- "We have been silent too long," Father Michael McNamara told the more than 300 people praying and protesting outside the Planned Parenthood on Commonwealth Avenue in Boston.

On Aug. 22, over 330 protests were held at Planned Parenthood (PP) locations across the country in a call to defund the organization that provides 30 percent of the nation's abortions. Four of those protests took place in Massachusetts cities -- Boston, Fitchburg, Springfield and Worcester.

The protests were sparked by a series of undercover videos, released by the Center for Medical Progress, that show high-level PP employees pricing fetal organs; the selling of human body parts is a federal crime. PP officials at the national level have denied illegal activity, saying that the employees were merely discussing the "reasonable payments" for the "transportation, implantation, processing, preservation, quality control or storage of human fetal tissue" allowed by federal law.

"We've been lied to," continued Father McNamara of Servants of Christ Ministries in Scituate. "Enough is enough."

He urged the crowd to spend more time in prayer, fasting and acts of charity for the sake of the unborn. He prayed for abortion-minded women as well as PP employees and escorts. Then, he invited all to raise their hands and pray over the PP building.

In a statement, Tricia Wajda, Director of Public Affairs at Planned Parenthood League of Massachusetts, said, "These protests are designed to shame the patients who seek basic health care services from Planned Parenthood and to intimidate the health care professionals who work here. Women should be able to get health care without fear of violence, harassment or intimidation."

Other speakers at the protest included executive director of the Catholic Action League C.J. Doyle, president of Operation Rescue William Cotter and state Rep. James Lyons (R-Andover). All condemned the actions of PP employees and called for taxpayer funds to be redirected toward healthcare clinics that do not provide abortions. A federal bill with that aim was defeated in the United States Senate on Aug. 4. Local pro-lifers plan to start a referendum in September that would take state funds away from the local PP branch.

The Planned Parenthood on Commonwealth Avenue, a busy street, stands next to a grocery store and the west campus of Boston University. At the protest, Boston Police officers cleared a throughway in the middle of the crowd so that pedestrians could continue to use the bustling sidewalk. People jogged through on their morning run. Several men came through, shouting insults and giving the finger to the men, women and children gathered there.

Those protesting stood on either side of the throughway -- against the side of the building or near the street with the crowd extending into the row of parallel parking spaces. The protesters spent much of their time in prayer, reciting the rosary before and after the event.

The PP was also open for business, and many women went inside, often escorted in by the clinic's volunteers. Veteran sidewalk counselors called out to them, offering them assistance and urging them not to have an abortion. One woman, Barbara Bell, called out a warning, "You will never be the same."

Karen Victoria, a member of Silent No More, an organization for post-abortive women, spoke about her abortion in 1973. She was 17, pregnant and "drowned in shame." Her mother drove her to the abortion clinic and Victoria testified that the abortion shattered her life. She carried the pain with her for over 40 years, but said that a couple of years ago she attended a Project Rachel retreat and "Jesus healed me."

Rita Russo, head of the 40 Days for Life prayer campaign in Boston, said that it is barbaric for a mother to kill her own child. She said that through multiple sting operations, it has been proved that PP employees lie to women about fetal development and the abortion procedure. They fight legislation that would give women more information under the guise of helping women.

"Women are strong and can handle the truth," Russo said. "We do not empower women by killing their children."

Liesse Lynch of St. Vincent de Paul Parish in Attleboro said that everyone needs to know the evil that happens inside abortion clinics. She regularly prays outside the Four Women Health Services in Attleboro, the only abortion clinic in the Diocese of Fall River.

"It's not normal to be killing babies and harvesting their organs," she said. "This is not acceptable. It's evil."