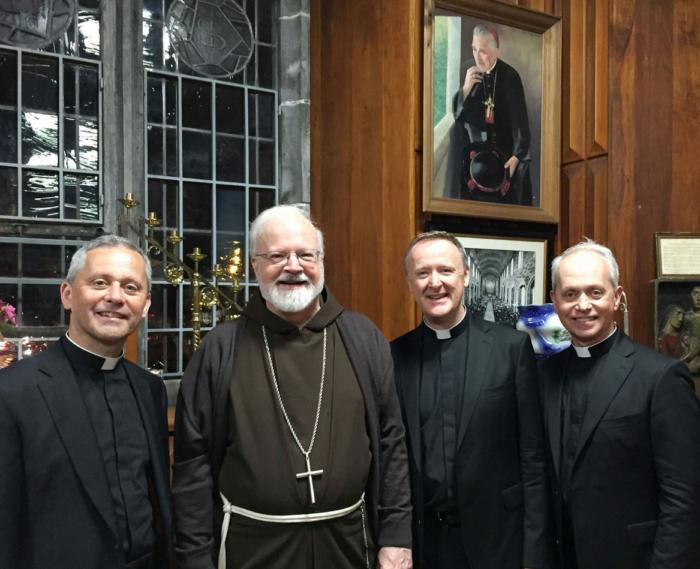 ''With the famous Irish singing trio, 'The Priests,' who put on a performance in honor of the Cathedral anniversary. You'll notice that behind us is a portrait of Cardinal Cushing.'' Photo courtesy/Cardinal Seán's blog

Last week I had the joy of presiding at the Mass to celebrate the 50th anniversary of the Cathedral of Our Lady Assumed into Heaven and St. Nicholas in Galway, Ireland.

The reason I was asked to preside at the celebration was that 50 years ago this cathedral was built in Galway City with the help of Cardinal Cushing and the Irish of Boston.

In fact, Cardinal Cushing was named as the papal legate to preside at the dedication of this beautiful Cathedral. It was a magnificent celebration with many important Irish officials in attendance.

I celebrated the Jubilee Mass on Friday evening. The Cathedral was packed and there were many concelebrants. Bishop Martin Drennan was very welcoming, as was the pastor, Canon Peter Rabbitte, and the curate Father Martin Walsh.

The Cathedral is the newest of any cathedral in Europe but is still very grand. The stonework is magnificent and the ceiling is California redwood.

(Saturday) afternoon we went out to Connemara, which is west of Galway. I thought it was interesting that when you are in Galway all the signs are bilingual, English and Irish, but as soon as you get into Connemara English signs are nowhere to be found.

I also thought it was very interesting that virtually everybody we met told us they have relatives in Boston. And not only that, but they can tell you what parish they are from and what neighborhood they live in. It was just incredible.

It made it very clear why they received so much support from the Irish in Boston for the building of the Cathedral.

On Sunday morning, I celebrated Mass with the community of Poor Clares in Galway, which has been there since the 1600's.

At the time of Cromwell, the sisters fled the middle of the country and came to Galway, where they were hidden with families until they were able to build this monastery.

Then, around midday, we drove out to the Shrine of Our Lady of Knock, which is the Marian shrine in the part of Ireland near where my family is from. They were celebrating the novena, and Cardinal Dolan had just been there the day before leading a pilgrimage from New York.

During our visit to the shrine, there was a Mass going on in the Basilica. The Basilica holds 4,000, and on that Sunday they had 4 or 5 Masses with the Basilica being full each time. In fact, the shrine gets over 1 million visitors per year, making it the most visited site in Ireland.

That day was also Cemetery Sunday, when local parishes celebrate an outdoor Mass in their cemetery to remember the dead. All the cemeteries we passed were full of people.

In the U.S., we usually hold commemorations like this around All Souls Day, but in Ireland they do it in the summer when the weather is better.