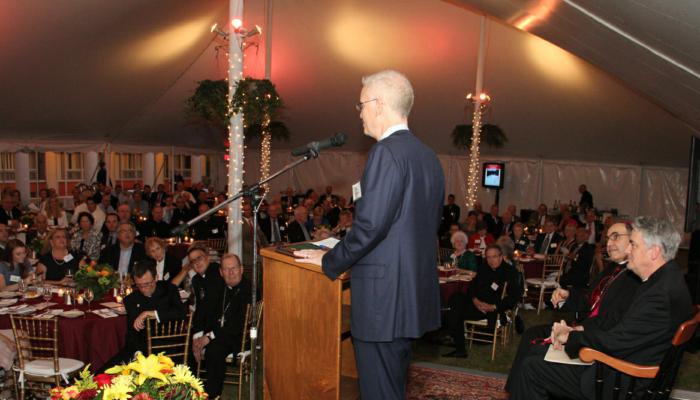 "To the best of my knowledge, this is the first time that the lawn party has been held at an active construction site," said John Corcoran, who chaired the Lawn Party with his wife Julie and their four daughters.

Corcoran said the seminary had raised $8 million for the project slated to cost $9 million. Seminary rector Father William Palardy, who had announced the project at the Lawn Party the year before, said funds continue to come in as construction continues.

Construction of the new learning center -- to include a new library, and make space for 12 new rooms for seminarians -- started in June. With 700 alumni and 75 ordained for Boston over the years, enrollment at the seminary remains high with an incoming class of 19 and 62 enrolled. The new addition and more office space will allow dorm rooms currently used as faculty offices to be used to house more seminarians.

"We're hopeful that when we come together next year you will be able to see and visit the finished product," he told guests.

Seminary staff said the Lawn Party raised around $250,000 which will go toward operational needs and support of seminarians -- who represent 38 dioceses and two religious communities.

Established in 1964, the seminary has provided for the formation of men over age 30 in the United States -- a revolutionary idea at the time, because only one such seminary existed in the world, the Pontifical Beda Seminary in Rome -- over the course of 51 years.

In keeping with the tradition at the Lawn Party, two enrolled seminarians spoke to guests about their vocations.

Class of 2018 seminarian John A. Maksym, of the Archdiocese of Detroit, previously served in the Navy, as a lawyer, and as a Judge Advocate General before he enrolled in the seminary.

"For me, priesthood has always embodied the highest possible vocation for a Roman Catholic man. From early childhood I became convinced that Christ had big plans for me," he said.

He said he was educated by Augustinians and Jesuits as a young man, but also by the example of his parents whom he called "the finest examples of Catholicism" -- a father who worked as a school principal and a mother who worked as a kindergarten teacher.

He studied at the University of Michigan before his commission in the Navy, graduation from law school, and 31 years as a litigation attorney in public and private service. He served 13 years as a trial and appellate court judge. In the Navy he served aboard a super carrier, testified before congress, personally represented the secretary of defense in federal court, and served in Iraq for eight months during the surge.

"Like each of my brother seminarians, the Lord has been working with me for a very long time indeed. He has honed my skills and loaded me with life experiences, so I in turn may give them to his people.

Class of 2016 seminarian Steven A. Maddaloni, of the Diocese of Rockville Center, worked as a high school teacher previously.

"People wonder sometimes, why become a priest this late in life? They think that something dramatic, something exciting must have happened," he said.

Maddaloni said rather the calling came to him early as a concept, stayed in the back of his mind over time, and was ultimately spurred by a question later in his life.

"He said, 'Steve, do you think God is calling you to a special role in the Church?' It was the most jolting question I had ever been asked," Maddaloni said.

He said the question stayed with him in secret for a long time, and even temporarily closed the door on discernment, but one of his students reignited the fire. Maddaloni asked if the student was considering becoming a priest.

A new question came to his mind. If such a young man could know his calling, what about Maddaloni? He said a talk with a priest persuaded him to open the door to vocation again, and that time he chose to walk through it by enrolling at Pope St. John XXIII National Seminary.

Bishop Uglietto gave remarks on the construction of the learning center. He echoed Father Palardy in his hope that guests next year would see it standing.

"As you know, it's more than just a building. It's a symbol of growth, commitment, the fulfillment of Cardinal Cushing's vision (over) 50 years ago, a much needed resource that will prepare the seminary well into the future," he said.