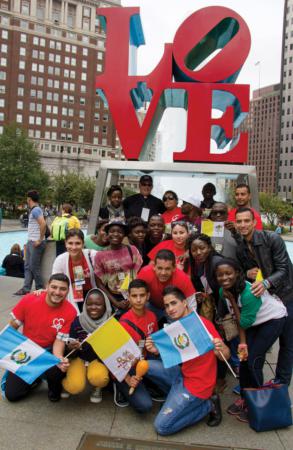 WALTHAM -- A group of 21 young adults of Hispanic and Ugandan decent traveled with their pastor Father Michael L. Nolan from St. Mary Parish in Waltham to Camden, N.J., Sept. 25, for the final stop Pope Francis's visit to the United States.

The group stayed at the Romero Center on the grounds of the St. Joseph Pro-Cathedral and walked six miles each way for the Festival of Families in Philadelphia on Sept. 26. They also took a ferry into the city for the Papal Mass Sept. 27.

Father Nolan celebrated Mass for the pilgrims before the first part of their journey across Camden, over the mile-long Benjamin Franklin Bridge, and into Philadelphia.

Father Nolan compared the trip with a trip to Jerusalem mentioned in the readings.

Regina Samuel, 23, said she came into the experience excited and prepared.

"The whole week I have been following the pope's every move on Twitter and CNN to try to get a picture of him or with him, hopefully," she said.

The first day, the group traveled on foot down highway 676 over the bridge and into the city. They stopped on the way into the city to sing songs in Spanish and Luganda for those eating at the Cathedral Kitchen, a local soup kitchen.

At the Festival of Families at the Benjamin Franklin Parkway the group saw the pope as he made his way through the crowd in the Jeep-based Popemobile.

Leiri Bocanegra, 27, said the knowledge that they would see the pope at the event kept pilgrims enthused even after the walk through tight city streets and densely packed crowds.

"Just to know that we were waiting for the pope kept us forgetting about how tired we were," Bocanegra said.

She said she was so excited that she didn't manage to snap a photo as the pope passed by just before the start of the Festival of Families.

The next day, the pope took his time making his way through the crowds for the papal Mass. He stopped multiple times to give blessings and hold babies as the Popemobile progressed along parkway for his final Mass in the United States. Those who hadn't gotten photos the day before got them that day and had the opportunity to participate in a Mass celebrated by the Holy Father.

Augustine B. Lukwago, 29, noted the beauty of the Traditions of the Church after the Mass, particularly moved by the priests going amongst the massive crowd to deliver Communion to the faithful.

"I just loved seeing the priests walk to take the Holy Communion to the people. That is just amazing. We do have our problems and little messes that we have here, the Vatican, and our parishes that we come from, but above all, we are Catholics and we stand together," he said.

"It was all very beautiful, walking, being able to share with others our faith, and also the tiredness. We just offered it all up to God," Gonzalez said through a translator.