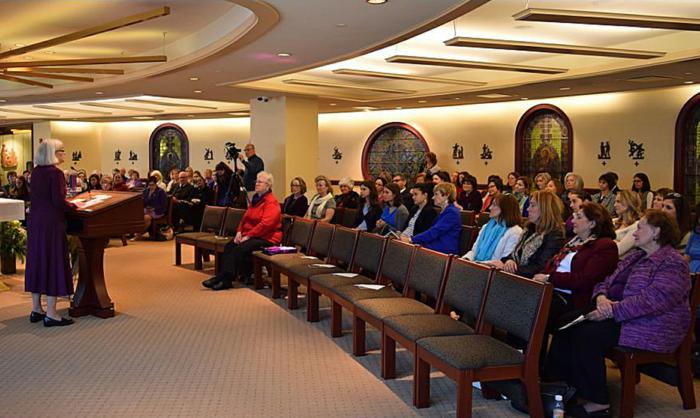 BRAINTREE -- Isolation and fear often accompany the pain of a past abortion. Women who regret their decision may not know where to turn, said Marianne Luthin, head of the Archdiocese of Boston's Pro-Life Office.

Addressing the ladies at the annual Women Affirming Life (WALI) breakfast on Dec. 5, Luthin said the Year of Mercy, which began Dec. 8, presents the perfect opportunity to promote Project Rachel, a post-abortive healing ministry. The confidential program offers love and support to women and men suffering from a prior abortion.

Many women who have had an abortion are so afraid someone will find out that they will not even pick up literature on post-abortive healing. "So many times women have told us they were even afraid to pick up a pamphlet because they thought someone might see them," she said.

Luthin said that people who want to help these women need to find new ways to reach them. The Pro-Life Office will launch an educational outreach program Jan. 1, 2016. Parish groups and women's spirituality groups will have the opportunity to host spiritual reflections on the need all of us have for mercy. The programs will be open to the wider parish community and will feature a witness from a Project Rachel counselor or post-abortive woman.

Pope Francis has also stressed the importance of healing from abortion during the Extraordinary Jubilee of Mercy. He has given all priests the authority to forgive the sin of abortion. Only bishops could absolve that transgression previously, except in areas where bishops extended that authority to priests in their diocese.

The WALI event began with a Mass, celebrated by Cardinal Seán P. O'Malley, who said that an important part of ending abortion is educating people on the harm the procedure does to women and men.

Many people erroneously believe that abortion is the best option for a woman facing an unplanned pregnancy -- better than raising the child and better still than adoption. Most want a quick resolution and find the option of placing a child for adoption as abandonment. Each year, there are nearly 100 abortions for every adoption, he said.

People who value life need to speak with clarity about the compassion they have for the couple in crisis. The work of Project Rachel is "of paramount importance," he added.

Sister Mary Lyman RSCJ led an Advent reflection after the breakfast, encouraging those gathered to think about how they can offer healing and mercy to others.

"At times, how hard it seems to forgive. We can probably think of many people we'd rather not try to forgive -- criminals, ISIS, the Marathon bombers, people killing our children in schools," she said.

Sister Lyman held up Jane Richard's response to the Paris terrorist attack as a model for Christ-like forgiveness. In 2013, Jane, then 7, lost her leg and her older brother at the Boston Marathon bombing. After her brother Martin's death, many were inspired by a photo of him holding a poster that said, "No more hurting people. Peace." Last month, Jane translated Martin's message into French and posted it online with the message, "To Paris. With love, from Jane."

Breakfast attendee Gina McClellan of St. Joseph Parish in Needham told The Pilot that she was inspired by the importance speakers placed on forgiving others.

"We all need to realize that it's not through ourselves but from God that we have mercy and forgiveness," she said.