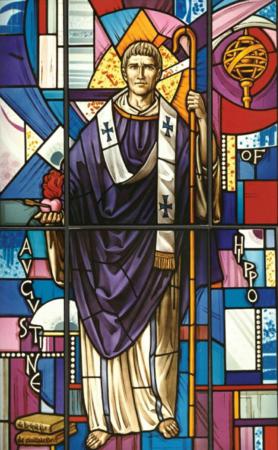 The Order of St. Augustine, or Augustinian Order, based upon the teaching of the Bishop of Hippo (A.D. 354-430), was founded in 1244, to live and promote the spirit of community as lived by the first Christian communities (Acts of the Apostles 4, 32-35).

There are many ways in which to describe the Augustinian Order, to speak of its character, its history, its mission, its charism. First and foremost, however, the Augustinian Order is people -- men and women -- who, in the words of the Rule we profess, "live together in harmony, being of one mind and one heart on the way to God." We are Christians who, captivated by the example of St. Augustine, journey together, as we build our house and serve the Lord's people.

The main purpose for your having come together is to live harmoniously in your house, intent upon God, with one heart and one soul (Acts 4:32).

Therefore call nothing your own, but let everything be yours in common. Food and clothing shall be distributed to each of you by your superior, not equally to all, for all do not enjoy equal health, but rather according to each one's need. For so you read in the Acts of the Apostles that "they had all things in common, and each was given what he needed" (Acts 4:32, 35).

These are members of the family

-- Friars, whether professed or novices, who are members of the various circumscriptions of the order,

-- Augustinian contemplative nuns belonging to the monasteries of the order,

-- The lay members of Augustinian Secular Fraternities, legitimately established by the prior general.

In addition to these three branches, the Augustinian family also includes other groups:

-- Religious institutes, both male and female, formally aggregated to the order by a decree of the prior general;

-- Other groups of lay Augustinians;

-- Lay faithful affiliated to the order.

The union of the order with these groups is a spiritual union of beneficial collaboration. All are united by an intimate spiritual bond and constitute one body under our father, St. Augustine. They use similar liturgical rites, they share the same spiritual graces, but above all, with one mind and one heart intent upon God, they maintain the same goal and ideal, namely, "the building up of the body of Christ" (Ephesians 4:12).

Many religious families in the course of time freely chose for themselves the Rule of St. Augustine. Some of these are named after him and imitate his manner of living; others, however, decided to live their lives simply under the inspiration of his Rule. Our order has known in the past, and even now recognizes, that it is united by a certain fraternal bond with all these congregations, and it is sincerely desirous of strengthening this bond in such a way that it may live in closer union with them. The order likewise wishes to promote collaboration with other religious families who take their inspiration from the spirituality of St. Augustine. And so that it may be consistent with its own tradition, the Order strives carefully to strengthen its long-standing bond with the Mendicant Orders or Apostolic fraternities.