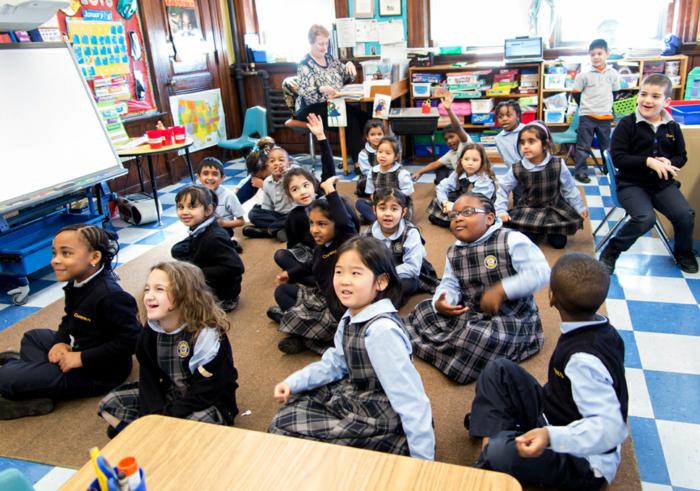 MALDEN -- Cheverus Catholic Elementary School principal Tom Arria is a man who loves his school. Its students, its faculty, its sense of community -- all of these add up to a school Arria is proud to lead.

And as much as Arria is proud to lead the school, the schoolchildren and staff are equally proud to have him as their head. Walking through the cafeteria, multiple children jump out of their seats to greet him, some with high-fives, others with hugs.

It is obvious that this is a relationship of mutual admiration.

His enthusiasm has yielded great results. In the two years he has been principal at the school, enrollment has markedly increased -- from 257 students last year to 339 students this year.

"We realized that we were losing so many families," he explained. "And so we began a concerted effort to increase enrollment."

Arria said that when he began speaking to Malden residents, he realized that many people did not know that the school -- formerly known as Cheverus Centennial School -- was a Catholic school. Realizing that the name did not reflect the school's identity, he petitioned the Catholic Schools Office and had the school name officially changed to Cheverus Catholic.

In addition to the name change, expansion has come through increased public outreach -- he personally hung banners throughout the city of Malden, for example -- and the creation of a new referral and recruitment program, through which families receive tuition credits for bringing in new families.

Another asset of the school, according to Arria, is the school's diversity. The population of the school is made up of a wide variety of ethnicities and religions, with only half of the schoolchildren coming from Catholic families.

And yet, "we don't apologize to anyone about being Catholic." he continued. "That's what differentiates us from the charter schools (and) the public schools. That is, at our deepest level, who we are."

"The theme of our school is taken from a passage from the Gospel of John -- 'They will know us by our love,'" explained Arria. "This is not just taught in religion class. It's the theme that is in everything we do -- in our service projects, in our food drive...we strive to build a sense of community here."

Arria was quick to point out that he does not take the credit alone for the success of Cheverus Catholic. The dedication of the staff -- many of whom have been teaching at the school for over 20 years -- and their commitment to Catholic education are at the core of the community fostered at the school, he said.

One of those teachers is Mary Ann Pulli, who for 24 years has been an assistant teacher in the school's kindergarten.

"I can't say enough about this school," she said. "The whole community of the school -- the parents, the teachers -- everyone is on the same page here."

And Pulli is not only an educator at the school. All seven of her children graduated from Cheverus Catholic; her daughter is currently one of the eighth grade teachers at the school; and four of her grandchildren currently attend the school.

"This is a great place to be," she said with a smile.