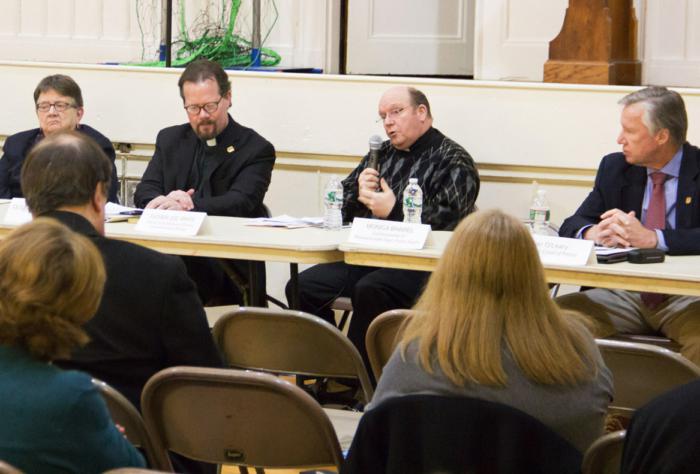 BROOKLINE -- State and local leaders on the front lines of addressing opioid abuse came together March 8 at St. Mary of the Assumption Elementary School in Brookline for a forum dedicated to seeking understanding of and addressing the ongoing crisis.

The forum, which was sponsored by St. Mary Parish and the non-profit residential treatment center Hope House, came less than a week after the four Catholic bishops of Massachusetts issued a statement calling for increased action to combat the growing opioid crisis in the state.

Father Brian Clary, pastor of St. Mary's, welcomed attendees to the Opioid Crisis Forum, and helped introduce the forum's 10 panelists, each of whom spoke on different aspects of addressing the opioid crisis.

Among the first panelists to address the gathering was Father Joe White, the director of the newly created Archdiocese of Boston ministry, Archdiocesan Addiction Recovery Pastoral Support Services (AARPSS).

The ministry collaborates with various agencies and organizations to assist parishes throughout the archdiocese in ministering to addicted persons and their families. It seeks education, prevention, treatment, and solutions for the disease of addiction.

"To somehow bring in that component of spirituality -- that's our efforts with networking with all the agencies and the legislation," said Father White.

Previously the pastor at St. Vincent De Paul Parish in South Boston until the summer of last year, Father White said the community there was "having a number of deaths" attributed to substance abuse, which is one of the reasons he became involved in AARPSS.

Brookline Chief of Police Dan O'Leary spoke about his department's experience as first responders more about the logistics of the opioid crisis, particularly in Brookline.

While many of the opiate overdoses his department sees are not fatal because officers are able to administer the anti-overdose drug Narcan, he said emergency services don't always arrive on time. Last year, he said, three people in Brookline died of opiate abuse.

Recovery law attorney Richard J. Dyer delivered evening's keynote talk, in which he talked about his own experience of drug addiction.

"I came into the criminal justice system as a man of 14 years old... There was no treatment at that time" for drug addiction, he said.

Dyer was incarcerated, but he worked to break his addiction and eventually earned his law degree from Northeastern University, becoming an attorney after Massachusetts Michael Dukakis issued a pardon for his criminal conviction.

He started his own practice, placing an emphasis on cases dealing with substance abuse.

"We're the only law firm, I think, so far, that has full-time recovery coaches... We're doing everything we can to access more treatment for longer periods of time," Dyer said.

He noted that although addiction is a "brain disease," the brain changes.

Following remarks by the panelists, the floor was opened for questions and comments.

One audience member offered her personal experience with drug addiction, saying that her family has a history of substance abuse.

"My sister was a heroin addict in the 70s; she's been a chronic substance abuser for 40 years. It's been a terrible life for her, and she really has never gotten better," she said.

She noted that her great-grandparents were alcoholics, and said she tried to do "everything possible to make sure that drugs were never going to be an issue in (her) life."

Even so, her daughter became addicted to heroin and oxycodone when she was in her teens.

The woman said that, after multiple rounds of detox and attending Alcoholics Anonymous, her daughter is now "clean sober" and "laser-focused."

In response to her story, Hope House's Newton noted the importance of not giving up on substance abusers. Even if they need to go to detox 40 times, he said, it's vital that they keep trying to get sober.

"All you need is that one time," he said.