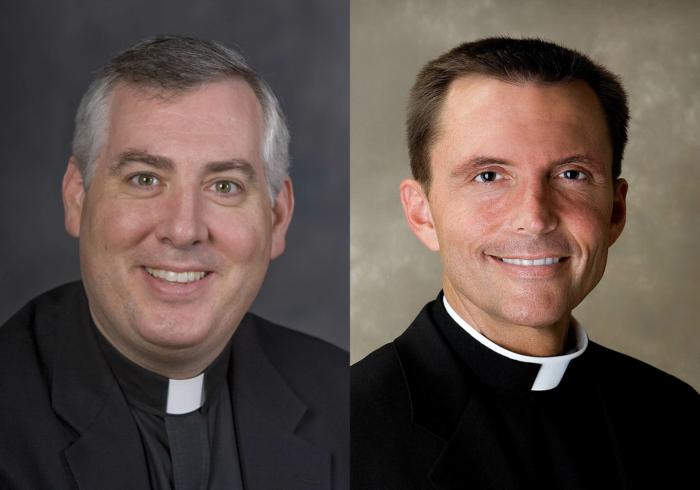 Watch the press conference with the new Boston auxiliary bishops

Cardinal O'Malley said, "In Bishops-elect Reed and O'Connell the Holy Father has selected two gifted priests as Auxiliary Bishops. They exemplify the heart of a pastor and joyfully bring the Gospel to life in their daily ministry. These kind and humble priests bless us with their prayerful commitment to serve the faithful with grace and a deep and abiding love for Christ."

Bishop-elect Reed said, "My gratitude goes to Pope Francis for this appointment and his example of a joyful life motivated by the Gospel. I am equally thankful to Cardinal Seán for his confidence in me as one of his priests. My life and work as a priest is one of service, not privilege. For me, today is a summons to an even deeper service in the name of Jesus, our only hope."

Bishop-Elect O'Connell said, "I am very humbled, and overwhelmed by the Holy Father's confidence in calling me to serve in this new role within the life of the Church. I have been an extremely blessed and happy priest for twenty-six years. I can only trust that God will continue to allow me to be happy serving as a bishop no matter what is His plan for me."

Cardinal Seán will ordain Bishops-Elect Reed and O'Connell to the episcopacy August 24, the Feast of Saint Bartholomew, at the Cathedral of the Holy Cross in Boston.

Cardinal Seán P. O'Malley will present the Bishops-elect at a 10:00am press conference in the Medeiros Auditorium at St. John's Seminary in Brighton. CatholicTV will stream live the press conference. You can follow it at http://www.thebostonpilot.com/CTV_Stream.html.