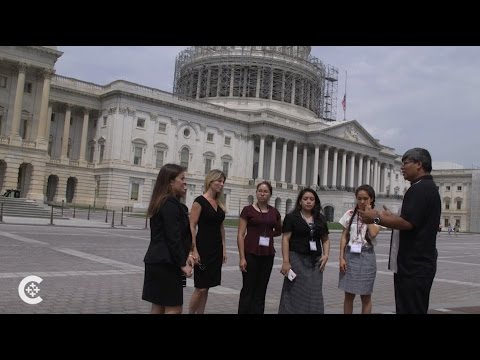 At training sessions in Baltimore at the agency's headquarters and at Loyola University Maryland July 25, about 120 students and faculty learned about issues important to the church and CRS, such as human trafficking, climate change and migration.

They listened to CRS professionals talk about their work in the field with poor communities worldwide, and they also had classes on social media, communications, campus organization, and advocacy.

They spent the next morning in Washington, meeting on Capitol Hill with members of Congress and staffers to discuss the issues.

"This program is a huge expression of faith," Aimee Perhach, a student at Calumet College of St. Joseph in Whiting, Indiana, told Catholic News Service after the lobbying sessions July 26. "Look at Matthew 25," she said, referring to the Gospel's admonition that whatever you do for others, especially the poor and marginalized, you do for God.

"Obviously, deeds are what he is judging on," she added.

Perhach said she has been working with CRS on her campus for two years before she came to Washington for the advocacy training.

"The BBC reports about the Syrian crisis haunt me," she said. "I'm encouraging Congress to do something."

The training and advocacy sessions are all part of CRS' SALT program -- Student Ambassador Leaders Together. Time also was spent in prayer, reflection and community building.

In 2006, CRS founded Catholic Relief Services University to incorporate students into their fieldwork through the SALT program. It started with representatives from just six Catholic colleges.

For many students, SALT was an opportunity for them to express their Catholic faith through word and deed for the first time in a real-world setting; other students had already undergone CRS training online or in a regional program, and had started a CRS chapter on their campus.

Their day in Washington began with an opening presentation about faith-based advocacy, its significance and its effects in government. Two staffers, one from the House of Representatives and one from the Senate, spoke to the students about life on Capitol Hill, answered their questions and gave them advice.

The students were divided into groups assigned to program advisers. Each group would get to talk to the staffers of two members of Congress. During the meeting, each student would get a chance to speak on the topic that he or she was assigned.

Armed with their facts and figures from the training sessions and presentations, the students either expressed thanks for a particular lawmaker's support of an issue or advocated for specific legislation to address an issue.

Jessica Marinucci, rising senior at St. Joseph's University in Philadelphia, visited staffers at the office of Sen. Patrick Toomey, R-Pennsylvania, to talk about the three CRS campaigns, including, "I Am Climate Change."

"The 'I Am' claims responsibility for causing those problems," said Marinucci, who has advocated on CRS issues before. This summer experience offered a networking opportunity and another chance to put her faith into action.

"As a Catholic and a Christian, we are called to be advocates. As a citizen in a secular nation grounded in faith, we are able to express and use faith as a reason to spark action," she told CNS. "That's a huge privilege. We have to use it to help the voiceless."

For Mary Ellen Kane, a rising senior at the University of Scranton in Pennsylvania, it was her first foray into advocacy after two years of running a CRS chapter on her campus, and writing and emailing members of Congress. Her meeting with Toomey's staffers went well, she said, and they were "willing to hear us out."

"With this, you get to see the impact of your work," said Kane. "It's faith in action, a concrete reality, and it definitely helped strengthen my relationship with Christ and with my faith."

Cathy Seymour, a campus minister at Scranton, talked about the students' work on campus with Syrian refugees, providing shelter, clothing, emergency supplies and access to local resources. She attended SALT with Kane and several students, as an extension of their refugee work on campus.

Beth Ford, assistant director of campus ministry at St. Joseph's, and Will Stehl, associate director of the Center for Peace and Justice Education at Villanova University in Pennsylvania, led a large group of students to meet with a staffer from the office of U.S. Rep. Pat Meehan, R-Pennsylvania.

Each student spoke a little about an issue of particular concern, in one instance citing statistics and data concerning the Syrian refugee crisis. The students encouraged Meehan's continued support of environmental protection legislation and to consider supporting the Business Supply Chain Transparency on Trafficking and Slavery Act. The bill would require companies to be more open about their production process and labor conditions.

After their meetings, the students all gathered at St. Peter's Church on the Hill for a final Mass and a lunch debriefing, during which students shared their mostly positive experiences.

"I think (SALT) is bringing faith and advocacy together, and faith is a huge part of it," said Price. "You can tell that it's the faith in (the students') hearts that has brought them to volunteer. This is getting Catholic soldiers on the ground, getting the word out (about) what the church wants to be done on these hugely important issues."

Price has been involved with faith-based international relief for more than 20 years; his work includes organizing communications and strategies at the executive level as well as writing, photographing and filming CRS volunteers in action around the world.

Kim Lamberty, director of university and mission engagement at CRS, explained the significance of the SALT program.

"The idea is to form them as future faith leaders and thought leaders," said Lamberty, "and to form them so that the CRS mission to serve the most vulnerable people around the world becomes part of who they are as Catholics and as leaders."