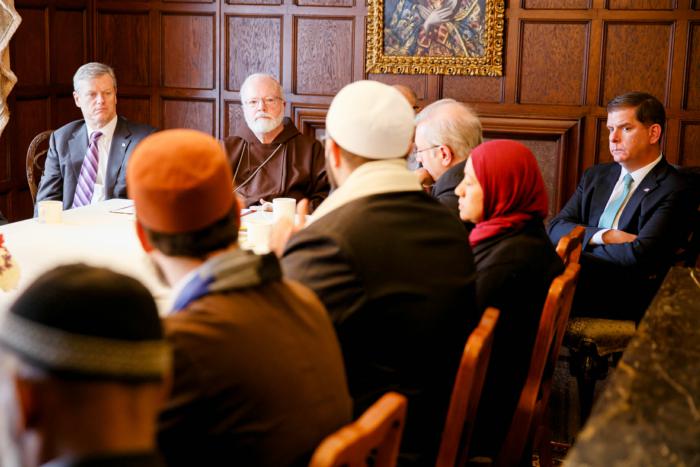 Gov. Charlie Baker, Cardinal Seán O'Malley and Boston Mayor Martin Walsh listen to remarks by Shaykh Yasir Fahmy of the Islamic Society of Boston Cultural Center at a gathering hosted by the cardinal at the rectory of the Cathedral of the Holy Cross Feb. 2. Pilot photo/Gregory L. Tracy

SOUTH END -- Representatives from the Archdiocese of Boston gathered with Muslim leaders and public officials Feb. 2 for an impromptu meeting to convey support and solidarity, especially in light of the recent executive order that restricted immigration into the country.

The meeting was held just days after President Donald Trump signed an executive order, Jan. 27, that bans all refugees from resettling in the U.S. for four months, and all Syrian refugees from resettling in the country indefinitely. The order also blocks immigrants from seven predominantly Muslim countries from coming into the U.S. for three months. Several courts blocked parts of the order, and as of press time, a federal appeals court was deciding whether a restraining order issued by a lower court against the travel ban should remain in effect while a challenge to the ban proceeds.

"We come here today to express our commitment to solidarity," said Cardinal O'Malley, speaking to the Muslim leaders.

"It is just very important that our people see us sit down at the table as friends," he added.

The executive order was heavily discussed during the meeting, with many voicing concerns about what they see as a growing climate of anti-immigrant, and particularly anti-Muslim, sentiment.

But, he said, "I think there are nefarious attempts now to kind of discombobulate that, and paint Islam as something outside of that."

A major problem, said Celene Ibrahim, a Muslim chaplain at Tuft's university, is a lack of trust of the Muslim community by the general public.

She said she often hears many harmful and false ideas, such as the notion that Islam is more of a political ideology than it is a religion. Even despite assurances to the contrary, she's seen those ideas endure, and believes they are "deeply seeded."

"A lot of times people simply don't believe, and I know a lot of us when we go out we get the accusation that we're just giving a public face, and this ties into the ideas that we're concerned about," she said, and her sentiments were echoed by many of the other Muslims leaders.

Amid the concerns, Gov. Baker and Mayor Walsh both stated their commitment to defend the rights of Muslims, as well as fight the refugee and immigration ban.

Gov. Baker spoke on the legal efforts the state had made to fight the order, and spoke on the importance of religious freedom, something he said is "baked deep into our history."

"There would be no America if there was no hunt of thirst for religious freedom," he said. "Religion is an inevitably powerful and positive part of who we are in America."

Mayor Walsh, citing that over 20 percent of people living in Boston are from another country, said the U.S. and Boston "were founded and based on immigrants."

"We're here to stand with you and beside you and behind you if we have to -- and we have to right now," he said.

Speaking to The Pilot following the meeting, Cardinal O'Malley said he called the meeting "because I was concerned that the present immigration crisis could cause a lot of suffering in the immigrant community, and also drive a wedge between us and the Muslim community."

"I wanted them to see that as religious leaders we're trying to work together to build a community where people have a sense of solidarity and working for the common good," he said.

He added that he has plans to hold another, larger meeting that will include a larger cross-section of the ecumenical and interreligious community.