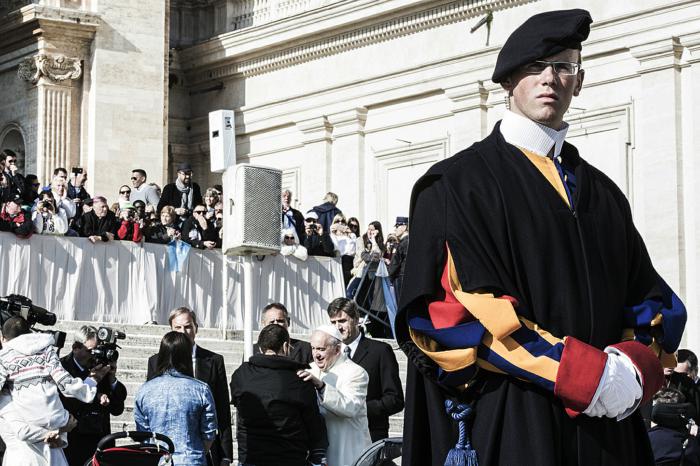 The exhibit 'Life of a Swiss Guard,' features photos and memorabilia of the historic military corps pledged to protect the pope. Pilot photo/courtesy Patrons of the Arts in the Vatican Museums

BOSTON -- A new photographic exhibition, which was unveiled at the Vatican Museums and is now on an international, tour is on display at Faneuil Hall in Boston through March 25.

Brought to Boston by the non-profit Patron of the Arts in the Vatican Museums' New England chapter, "Life of a Swiss Guard," reveals the most photographed military corps in the world in a new light, away from the uniforms and flags. The exhibit was prominently displayed in the Vatican Museums Cortile delle Corazze in Rome this past spring, and came to Faneuil Hall Feb. 4 following a stop in California.

Photographer Fabio Mantegna has captured on film an intimate view of the life of the men who make up the Swiss Guard. Over a period of several weeks, he was fully immersed in the daily lives of these men, dedicated to protecting the pope. From his vantage point as an insider to this highly visible, yet scarcely understood military corps, emerges through his photographic art a rare insight into their collective identity, but also their individual personality, all of which is sealed by their oath to lay down their lives, if necessary, in defense of the Holy Father, the Successor of St. Peter.

"We feel extremely privileged to be bringing this unique exhibit to a wonderful venue," said Andrea Gabrielle, chair of the New England chapter of the Patrons of the Arts in the Vatican Museums. "There is a charming symmetry between the honored traditions featured in this exhibit, and the tradition and history of Faneuil Hall."

The exhibit features military paraphernalia passed down from generation to generation of this military corps, as well as 80 photographs that unveil the dedication of men who take the oath as members of the Pontifical Swiss Guard.

Visitors to Faneuil Hall can find the exhibit on the 4th floor of the historic building, above the Great Hall, in the Ancient and Honorable Artillery Company of Massachusetts museum. Admission to the general public during the museum's normal hours of operation (9 a.m. to 3 p.m. Monday through Friday) is free.

Additional information on the patrons and the exhibit is available at www.nevaticanpatrons.org.